(April 18, 2018) Catherine Read, a former candidate for Fairfax City Council in 2012, talks with first time candidate So Lim about some of the challenges of running in a May election for local office. The walk list candidates use to determine whose door to knock on is based on who has voted in that election previously. Local elections – also called municipal elections – have notoriously low voter turnouts. Many towns and cities have moved their elections from May to November to capitalize on the higher voter turnout for major statewide and federal elections. Fairfax City is not one of them.

Two current Fairfax City Council Members, Jeff Greenfield and Ellie Schmidt, announced that they would not be seeking re-election this year. This has left two open seats on the six person City Council. There are now eight candidates on the ballot for those six seats and the six candidates receiving the most votes on May 1st will make up the 2018-2020 Council in Fairfax City. For the first time in the city’s history, there are two Asian Americans on the ballot: So Lim and Sang Yi. There is a substantial community of Asian Americans in Fairfax City, most are Korean Americans. Since incorporating as a city in 1961, there has been almost no diversity on the council. Mayor David Meyer, a former Council Member who is running unopposed, holds a Mayoral position that has been exclusively held by white men since the city was founded. 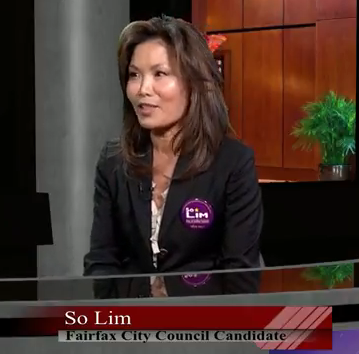 So Lim has found that people care about very local issues: traffic, housing density, redevelopment projects and the downtown economy in Fairfax City. She has branched out beyond those who have previously voted in a May election for City Council and has started to talk with others in the city who aren’t aware there is a May election. Fairfax City has a high median income and a high level of education among the residents who live there. It’s perplexing as to why this population of people is not civically engaged in determining who will set their tax rate, fund their schools and pave their roads. So further discovered that there are over 300 registered Asian American voters in the City and only 20 have ever voted in the City Council election previously.

They discuss the City’s relationship with George Mason University, where Catherine is a 1984 alumna, and consider ways to better engage the thousands of students who live just outside the Fairfax City border. These ideas include bike sharing, better sidewalks, and businesses that appeal to college students. Catherine points out that many city voters were here long before Mason became the largest university in Virginia (by enrollment) and that having a “commuter school” in the 1970s and 1980s is vastly different than suddenly finding you are a “college town” within a matter of 20 years. 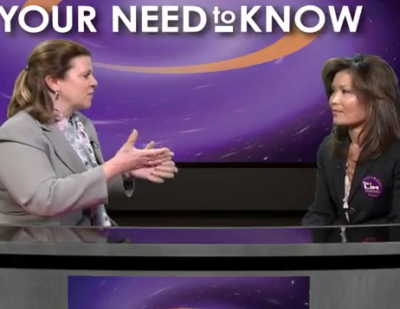 Catherine and So discuss affordable housing in the context of providing a variety of housing stock that allows everyone who is currently here to remain here – like senior citizens who want to age in place in homes more appropriate to their space requirements, income, and mobility. Students who want to remain in the area after graduating from Mason find it difficult to find housing they can afford. Families with children are drawn to our residential neighborhoods – many of which have parks nearby – but have trouble affording them. There are numerous redevelopment projects in various stages of completion in the city that will provide more townhouses, condos and apartments but affordability is still an issue and traffic concerns make many of these projects unwelcome by city residents.

In discussing ways in which to tap into the rich diversity of Fairfax City’s residents, So Lim proposes an international festival in the city that will bring people together. Catherine shares information about the annual International Showcase organized by the Centreville Immigration Forum that does exactly that. Now in it’s 8th year, the International Showcase is a celebration of the culture, music and food of the many ethnic communities represented in the Centreville area. Creating opportunities for a richer community connection and fostering cross cultural appreciation is something former Mayor Scott Silverthorne attempted to do when he brought Walter Tejada, Chair of the Arlington Board, to the city for a forum on diversity in 2013. While the forum was well attended, there was no advancement of the ideas brought by Walter Tejada.

So Lim is a local business owner. She started her insurance business nearly 20 years ago when her youngest child was only 4 months old. Fairfax City has been a good place to grow her business to quadruple its original size. She’s lived with her husband Mark Hardy in Farrcroft since 2001, her sons attended Fairfax City schools, and she is the former President of the Korean American Association of Greater Washington. While successful in these ventures, she’s not been involved politically in the City. As a political neophyte, she’s navigating her way through this process. So enjoys talking to people at their doors and she’s interested in what they have to say about what they love – and don’t love – about Fairfax City. She’s hoping that voters will give her an opportunity to bring a fresh perspective to council decision making, the future visioning of the city and some experience in building healthy businesses.

More information can be found about So Lim at www.SoLimForCityCouncil.com Election day is May 1st.

(May 23, 2017) Catherine Read talks with Trudy Harsh, founder of The Brain Foundation and Laura’s Houses. She formed this non-profit in 2003 to provide supported housing for those in our area living with brain diseases such as schizophrenia and bi-polar disorders. Laura’s House are named for Trudy’s daughter Laura who had a brain tumor removed when she was 8 years old and struggled with mental health issues up to the time of her death in 2006.

Trudy is a Realtor in Northern Virginia with over 40 years of experience. She is quick to acknowledge that she is not involved in direct services for mental illness, but she does know real estate. Her mission is to provide safe and affordable housing for those who are capable of living more independently in a small group setting. She keeps this population in Fairfax County from becoming homeless by providing housing based on their ability to pay.

The first house she purchased was in Fairfax City and it was made possible by an infusion of $50,000 from another Realtor who believed in her mission. There are now 9 Laura’s Houses. She purchases 4 bedroom homes so there are four residents in each home. They are in integrated within the larger community in a way allows them to be part of a neighborhood. Trudy expects that they will be self sufficient in 10 to 15 years.

The Brain Foundation has partnered with Pathways and the Community Services Board (where Trudy served for two terms) to find potential residents who are likely to thrive in this environment. Not every placement works out and Trudy monitors the residents in each home and makes adjustments as necessary. 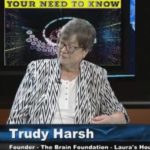 The long term consideration for this founder is about succession planning, maintaining and adding supporters, and recruiting new board members to keep the work of The Brain Foundation viable over the next decades beyond her stewardship. This organization has been successful in showing that supported housing can make the difference in the lives of those living with brain disease. They need an infusion of new interest, younger supporters, and of course . . . money.

On June 3, 2017, The Brain Foundation will host it’s annual fundraiser and this year’s keynote speaker is Virginia Senator Creigh Deeds. It will be held at Maggiano’s at Tyson’s Galleria and the public is invited. If you can’t attend, consider making a donation to this very worthy organization.

Most significantly, generalists—such as planners and, one hopes, mayors—ask the big-picture questions that are so often forgotten among the day-to-day shuffle of city governance. Questions like: What kind of city will help us thrive economically? What kind of city will keep our citizens not just safe, but healthy? What kind of city will be sustainable for generations to come? These three issues—wealth, health, and sustainability—are, not coincidentally, the three principal arguments for making our cities more walkable.

This is an engaging and readable book written by Jeff Speck of Washington, DC. I was captivated by the very first page and read all the way through to the annotated footnotes (which are quite interesting.)

Since I live in a small city, located in the middle of a huge county, next to our Nation’s Capital, this is not an academic exercise. We are in the midst of making decisions about redevelopment and roads that will impact Fairfax City for the next 50 years. If a project turns out to be ill conceived or poorly executed, we will still be stuck with it for decades.

The most striking aspect of this book is how “counter-intuitive” Speck’s advice appears to be. In other words, we tend to accept what I would term “commonly held notions” about traffic, roads, parking, economic development, housing and public transportation. SURPRISE! Just because a lot of people believe something to be true, doesn’t make it true. It just makes it something a lot of people believe.

One of my favorite “aha” moments is about Induced Demand.

Induced demand is the name for what happens when increasing the supply of roadways lowers the time cost of driving, causing more people to drive and obliterating any reductions in congestion.

Speck points out that “there have been so many incentives for driving, cars have behaved like water, flowing into every nook and cranny where they have been allowed.” So our quest to widen roads and reduce congestion only creates capacity for more congestion. Logical – right? So why do we continue to build more roads to try to “ease congestion” when the data shows it just creates more? END_OF_DOCUMENT_TOKEN_TO_BE_REPLACED

(Jan. 22, 2012) – One of my new favorite books is Tom Peter’s “The Little Big Things.”  I heard Tom speak about the book a couple of years ago at Debbie Weil’s “Sweets & Tweets” event at Baked & Wired in Georgetown. Tom was everything I imagined he would be in person – and so was the book.

The essential premise of the book is that often the small things that happen between people become the things we tend to remember most vividly.  Interactions that are unique, personal, intimate and often unexpected stay with us long after we have forgotten many other things. Tom posits that it’s these small things that feed relationships, engender loyalty to businesses, and sometimes change the course of history.

Such a “little big thing” happened today at Young’s Dry Cleaners on Fairfax Boulevard in Fairfax City. Julia’s family took over the dry cleaner’s in 2004. It’s within walking distance of my house in Fairchester Woods and over the years I’ve developed a very friendly relationship with Julia and her mother – the only person I trust with my alterations.

I called Julia this morning to see if her mother would be there because I needed some pants hemmed and the sleeves shortened on a jacket.  It snowed last night and the streets were messy so I wasn’t sure her mom would be there.  Julia assured me she could do the pinning and she would be there until they closed tonight at 7 pm.  END_OF_DOCUMENT_TOKEN_TO_BE_REPLACED