The Office of Human Rights and Equity Programs handles discrimination complaints in fives different areas: housing, employment, public accommodations, credit and private education. If a person thinks that they have been discriminated against, they can file a complaint with the county office. A case will be opened, and an investigation will ensue. Squires notes that protected classes of individuals are race, color, national origin, sex, religion, familial status, disability, marital status and age discrimination.

If someone thinks that they have been discriminated against, Squires encourages them to contact her office to learn if they have a viable complaint. People can call the office (there is a TTY phone number available for the hard of hearing), they can visit the office in person and speak with a representative, or they can reach out to the office online to share information about their experience. In all of these situations, a case manager will be assigned to the complaint, and will identify if there is enough evidence to proceed. People have 365 days from the date of the event to file their complaint. 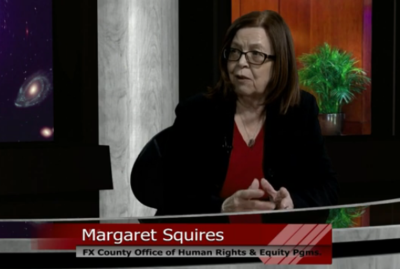 After the case managers determine that there is a basis for the claim, they move forward in contacting the housing provider to try and resolve the issue. The case mangers always try and bring the parties together to come to a resolution. If an investigation has determined that a housing provider is in violation of fair housing law, and they refuse to come to an agreement, then Squire’s office will refer the case to the County Attorney’s office for further review. Many times, after the disputes are resolved, the person in violation of the law will be required to attend a Fair Housing training in order to better understand the law and how to conduct business in the future.

In the second segment, Catherine discusses some trends that Squires has been noticing in the field.   Specifically, she mentions concerns regarding an increasing reluctance to file a complaint by members of the Hispanic community, and the immigrant community at large. In today’s current political climate, many immigrants are afraid to speak up even if they are legitimately covered under the law. It is a disturbing trend, and Squires emphasizes that her case mangers do not need documentation from people when filing a complaint. She worries that many people are getting taken advantage of, because they are unwilling to speak out.

Additionally, Squire’s office is available as a resource to the community, as they provide education and outreach services. Services include training for housing providers, real estate professionals, property managers, lenders and other housing professionals. They are also available to provide information and training to the public at no cost.