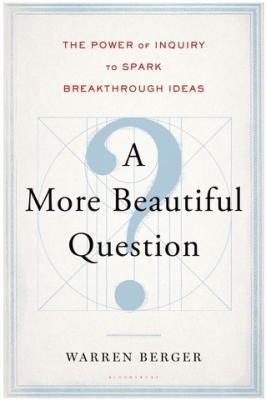 “Organizations gravitate toward the questions they ask.” And that applies to countries, communities, families and individuals. We all live in the world our questions create. This is according to David Cooperrider, PhD, a professor of Social Entrepreneurship at Case Western Reserve University.

I loved every aspect of this book. Author Warren Berger has done deep research that is inclusive of so many thought leaders from the academic research world, the business world, educators, marketing gurus . . . people from every walk of life who recognize the value of questioning and who pick apart our cultural bias against it.

Berger’s subjective definition of a “beautiful question” is “an ambitious yet actionable question that can begin to shift the way we perceive or think about something, and that might serve as a catalyst to bring about change.” The title of the book comes from an e.e. cummings poem: “Always the beautiful answer, who asks a more beautiful question.” I saw similar themes explored in Ed Catmull’s “Creativity Inc” and in Brian Grazer’s “A Curious Mind.”

There is a great deal of questioning about how we educate young people. Preschoolers come into the classroom asking hundreds of questions a day and by middle school they ask practically none. The rush to standardize teaching before kindergarten and the continued focus on students memorizing facts comes under serious scrutiny here. The author and a number of education researchers make the case for “continued neoteny” into adulthood. Our ability to learn through questioning should not cease as we get older, it should be the foundation and approach to meeting a world that now has a “glut of knowledge.” Neuroscientist Dr. Stuart Firestein points out that “glut of knowledge makes us more ignorant. The amount an individual knows as relative to the growing body of knowledge is getting smaller.” (Look for his TED Talk)

John Seely Brown points out that without a filtering device, we can’t separate what is relevant and reliable from what is not. Context becomes critical and we must develop the ability to triangulate. “Questions trump answers.” That is a theme expounded upon from the first chapter to the last, but it is not part of our culture or educational process. Seth Godin opines that “Our new civic and professional life is all about doubt, about questioning the status quo, questioning marketing and political claims. And most of all questioning ‘what’s next’?”

Berger outlines his process of questioning into Why, What If, and How. He says this roughly mirrors British Psychologist Graham Wallace’s four stage process of creativity from nearly a century ago: Preparation, Incubation, Illumination, Implementation. He points out the beauty of having a process: “Having a process helps you to keep taking next steps. Even when you don’t know what you’re doing, you still know what to do.” That is one of the major themes of Ed Catmull’s book “Creativity Inc” in describing how Pixar develops new animated film projects – they trust their process.

The research on questioning relative to business and business leaders, innovators and inventions is also quite compelling. “The most creative and successful business leaders have tended to be expert questioners. They’re known to question the conventional wisdom of their industry, the fundamental practices of their company and even the validity of their own assumptions.” Hal Gregersen of the MIT Leadership Center has observed that business leaders who question have an unusual blend of humility and confidence. Humble enough to acknowledge a lack of knowledge, confident enough to admit it in front of others.

That runs counter to both business culture and our vision of leadership. Sir Kenneth Robinson: “In our culture, not to know is to be at fault socially.” And so we prize those with answers over those who excel at asking the more beautiful – or insightful – questions. Frank Lloyd Wright is credited with this observation: “Questioning has an inverse relationship to expertise. An expert is someone who has stopped thinking because he knows.”

I highly recommend this book to thinkers. To question is to grow. In fact, it’s really the only way to grow. In an age where knowledge is accumulating and expanding at an exponential rate and is more accessible to more people than ever before, to stand still is to be overrun and made irrelevant. I have no desire be irrelevant.