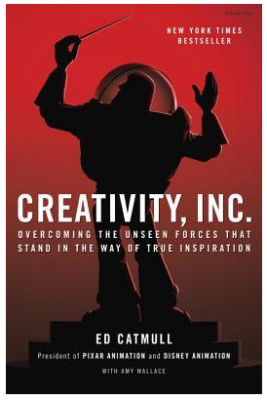 (June 17, 2014) “The future is not a destination, it’s a direction.” I loved this book for so many reasons. I heard Ed Catmull at Fast Company’s “Innovation Uncensored” Conference in NYC in April. He has an amazing story to tell about his lifelong interest in animation, his determination to use computers to make animated movies, and how Pixar made that dream possible. This is designed to be a business book with lessons that can be applied to leading and managing “creatives” within an organization. I believe his lessons can be applied to any business. I also believe that all people are creative. One great bonus of the book is the “back stories” he tells about the great animated movies of the last 20+ years produced by Pixar. The birth of Pixar was made possible by Steve Jobs, who bought it after months of shopping for a buyer after George Lucas decided to shed this division of Industrial Light & Magic. The team of Ed Catmull, John Lasseter and Steve Jobs were responsible for revolutionizing, and successfully commercializing, full length computer generated animated films starting with Toy Story in 1995. The process of developing a story, and the years it takes to produce one of these films is fascinating. Throughout it all, Ed Catmull weaves a riveting narrative of the last 27 years punctuated by observations about what made their company successful and their films excellent. The two are closely tied together. The last chapter talks about Steve Jobs specifically. Ed Catmull feels that other biographers, writers and journalists didn’t really “get” Steve – not the Steve Jobs he knew for 25 years. He believes Steve evolved over those years. One interesting observation he makes about Jobs: “He was well aware that decisions must never be based on emotions alone. But he also saw that creativity wasn’t linear, that art was not commerce, and that to insist upon applying dollars and cents logic was to risk disrupting the thing that set us apart. Steve put a premium on both sides of this equation: logic and emotion. And the way he maintained that balance was key to understanding him.” There were so many truths in this book and I enjoyed it so much, I was sorry to see it end. The last part of the book are some core principals of leadership he lays out as “starting points.” Some that resonated with me: “If there is more truth in the hallways than in meetings, you have a problem.” “Characteristic of creative people is that they imagine making the impossible possible.” “If there are people in your organization who feel they are not free to suggest ideas – you lose. Do not discount ideas from unexpected sources. Inspiration can, and does, come from anywhere.”

The true bonus of this book is the back stories of so many beloved movies that I watched with my own children. The achievements of Pixar as an organization, and the recognition of how individuals within that organization made those innovations possible, is about as uplifting a story as any movie they ever produced.