(Oct 23, 2017) Catherine Read talks with several women in the Network NoVA organization about how they found each other, how they came together around shared goals, the momentum behind the June 2017 Women’s Summit, and what they are doing in the final days of Virginia’s 2017 election cycle to get more progressive minded candidates elected to office.

In the first segment, Stair Calhoun and Katherine White discuss how they began to organize for the Women’s March shortly after the presidential election of 2016. They knew each other previously and worked together to organize transportation (including water taxis) for women in Northern Virginia who wanted to attend the march. They organized volunteers into teams and created opportunities for women to make pins and buttons for the march as well as selling 1,500 beanies and march t-shirts. It was a collaborative effort from the beginning. Meetings in basements and restaurants, attending Huddle meetings, hosting their own meet-ups and building a network of other women willing to do the same. It has been a learning process for many women who have never engaged in political activism and are focused for the first time on the importance of statewide elections. It was also about shared trust and risk-taking to make things happen. 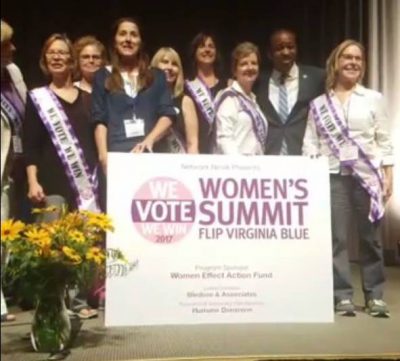 Barbara Jones and Holly Hazard joined the effort to move the momentum of the Women’s March forward into a grassroots effort around Virginia’s 2017 elections. Virginia is one of only two states with an off-year Governor’s race, and we are also electing a Lt. Governor, Attorney General and 100 members of the House of Delegates. Once the idea of hosting the Women’s Summit, Flip Virginia Blue conference was born, eight women put together the event in just 70 days. Held at the National Conference Center in Leesburg, it attracted numerous supporting organizations as sponsors, brought in 344 attendees and 30 candidates running for the House of Delegates from all over the Commonwealth of Virginia. Each candidate got to speak for a few minutes and each one was impressive in the stories they had to tell about why they were running for office. The idea of the initiative for The Blue Migration came out of that event as Network NoVA turned their attention to how to support candidates in rural areas with the manpower and resources available in Northern Virginia.

Robbin Warner talks about the concept of Postcards4VA that took off and spawned dozens of postcard parties at kitchen tables throughout the area. People hosted their own postcard parties which involved printing out the cards for specific candidates and then hand addressing them and writing personal messages on them. It was a massive effort resulting in over 136,000 postcards being printed, hand addressed and mailed with a stamp – all provided by individual volunteers. Efforts like this involved even the youngest of family members and resulted in a statewide civics lesson to many people who have not gotten involved in statewide elections before this year.

From the beginning, Network NoVA was about collaboration with existing organizations, using social media to meet people where they were already congregating and showing up to events with buttons and flyers to promote the Network NoVA events. Some events were fundraisers, many others were canvassing initiatives to door knock and phone bank for individual candidates and for the Democratic ticket. Ideas were welcomed from every source and resource and many were a triumph of will and ingenuity over any previous experience or know how. The white board video Why Virginia Matters 2017 is an effort to explain in the simplest terms possible why voters need to care about the elections taking place on Nov. 7, 2017. 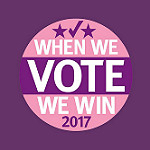 The branding of “When We Vote We Win 2017” on buttons and t-shirts has become ubiquitous in the year’s campaign cycle – in Northern Virginia and across the Commonwealth. In the final days leading up to election day, Network NoVa is focused on activities to Get Out the Vote (GOTV) and all are welcome to join the effort. You can follow them on Twitter @NetworkVirginia, find them on Meetup,  join their Facebook group, or check the website for updates including the planning for The Women’s Summit on June 23, 2018.  Email them at [email protected]