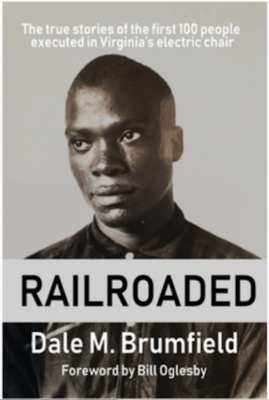 (Sept. 2020) This book is an excellent work of research, scholarship and storytelling. Dale Brumfield, a native Virginian, historian, author and cultural archaeologist continues to write about the untold history of this Commonwealth that we never learned in school.

Railroaded is a window into the history and culture of the Commonwealth of Virginia through a very specific lens of capital punishment. To understand how so many young black men were put to death, we must first acknowledge that Virginia is ground zero of the slave trading of captured Africans that began in 1619. Those sales of Black Africans to White landowners established human beings as property, not people, and slavery as an important economic engine of Southern prosperity.

While this book is dedicated to telling the stories of the first 100 people put to death in the newly introduced electric chair from 1908 to 1920, the subtext of these stories is one of white rage, resentment and institutional racism in Virginia that is present to this very day.

There are so many layers to this book. The first that struck me was that the names of the victims and the names of the accused look so very similar. They are the same old Virginia family names that used to fill pages of local phonebooks. I recognize these family names because I have lived in Virginia all of my life and these are the names of my schoolmates, neighbors and leading citizens of the communities where I have lived from Southwest Virginia to Northern Virginia.

That is a reminder that many Black Virginians bear the surnames of the people who owned their ancestors. They do not have a family history of their own with an ancestry separate from those who enslaved them. Their identity was stolen when they were abducted from their own communities on another continent and sold as property to White people who chose what they would be called and whose mark was left on their children, and their children’s children for all of their days.

Reducing Black people to less than human is the foundation upon which this country’s culture and our system of justice and punishment has been built. Virginia’s legislature and our law enforcement created a two-tiered system that was both codified and legitimized in the law.

For many years a Black person was not allowed by law to testify against a White criminal defendant, so crimes such as the rape of a Black woman by a White man were rarely prosecuted, and never resulted in a death sentence since the victim could not testify against her attacker.

As a carryover effect, there was not one White-on-Black capital crime punished by execution – and unbelievably, Virginia did not execute a White for killing a Black person until 1997, when Thomas Beavers was executed for the murder of Marguerite Lowery.

Another startling layer to this book is the long and detailed history of violence against women. Rape and assault, along with husbands killing wives, and men stalking and killing the objects of their obsession. Women have not fared well here in the Commonwealth. It took until 2020 for legislation to pass in our current legislature that allows the Courts, through due process, to issue Risk Orders removing guns from the hands of people who are a risk to themselves or others. It’s hard to imagine how many women could have been spared murder while fleeing domestic violence if only we had the political will to protect them.

This book is an important part of Virginia’s history. I think it’s difficult for many people to understand how unarmed Black people can be killed with impunity and no one held accountable. It has ever been thus. It is hardwired into our culture and carried forward generation after generation. The history of law enforcement, the judicial process, mass incarceration and capital punishment present the blueprint to how we got here in 2020. More books like Railroaded need to be researched, written and widely read so that the next generation perhaps makes the intentional choice not to carry these terrible precedents forward.

Listen to my interview with author Dale Brumfield here: https://youtu.be/z0c36–BJWA