(Apr. 30, 2018) Catherine Read speaks with Fairfax County Democratic Committee Chairman Dan Lagana. Ninety days into his term, Lagana speaks about the upcoming primary elections, the grass roots effects of the Democratic blue wave washing over the commonwealth, and gerrymandering. He notes that his job as FCDC chair is to get Democrats elected to offices throughout the county – from Supervisors to School Board to Sheriffs to the Soil and Water Council in Fairfax County.

Although some of these offices that are up for election are non-partisan, Lagana notes that the candidates can still seek party endorsements, and the party can harness its resources and organizing power to help elect like-minded candidates. Lagana spoke in detail about the election of school board at-large member Karen Keys-Gamarra, which took place in the late summer of 2017. Karen sought FCDC’s endorsement for an oddly timed special election, and by having her campaign work collaboratively with FCDC, they were able to work together to prevail. Catherine also brought up the question of the municipal elections in May – asking Dan what his thoughts were on this process.  Dan believes that all elections should be in November, as it front and center on everyone’s mind, and the turnout is likely to be higher.

Following the 2016 election of President Donald Trump, local democratic committees across the country saw a rise in participation and membership. On a local level, grass-roots disrupter groups like Network Nova and Win Virginia gained a lot of traction by bringing in people who had never before been involved in the political landscape. This helped usher in a blue wave last November, as Democrats picked up 15 seats in the House of Delegates. Lagana believes that FCDC has welcomed these newcomers with open arms, and promotes that more participation in the political process can only make us stronger as a county, state and nation. He shares that he has been working hard to make FCDC an inclusive environment, where everyone has a voice and a seat at the table. 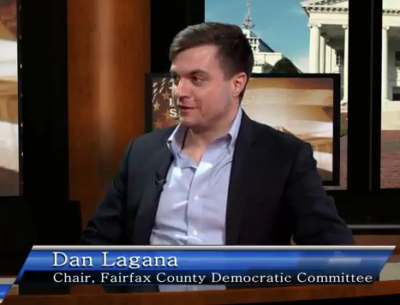 As chair of the FCDC, Lagana reiterates that it is his job to help elect Democratic candidates to office in Fairfax County. As for how the districts are drawn, from the Supervisors to the Congressional districts, he thinks that there is much work to be done in Virginia on making it a more fair process. When the party in power is the one drawing these districts, the outcome is fairly predictable – that party will do whatever it takes to stay in power and protect incumbents. Lagana looks to states that have implemented a bi-partisan process for re-drawing districts for ideas. Although not perfect, states like Arizona have made strides to improve how it can be accomplished.

As for gerrymandering cases making their way through the court system, in Wisconsin lawyers for the case of Gill vs. Whitford are currently awaiting a decision to see if the Supreme Court will hear the case. This will be a telling sign, and have an impact on gerrymandering cases throughout the country. The fact that SCOTUS has opted to not hear the Pennsylvania case where the districts have been re-drawn, may be an indicator that they do not want to get involved. Lagana notes, however, that in order for things to change there must be a change to the law, or some sort of test, to show that the districts are fair. Without this, he is convinced that it will be business as usual.

In the final segment of the show Catherine speak with Lagana about the upcoming primaries in the 10th Congressional District. There are 6 primary candidates vying to go up against Rep. Barbara Comstock, who is thought to be vulnerable this year. The 10th district is routinely listed by the Cook political report as one of the most competitive races in the nation in 2018. There are 49 Fairfax County precincts inside the 10th District, and Lagana invites all eligible voters to take some time getting the know the candidates, and be sure to get to the polls on June 12, 2018 for the primary. There will be many opportunities to meet these candidates at local forums, including the Democratic Business Council of Northern Virginia (DemBiz) forum, on Friday May 4th at Maggiano’s in Tysons Corner. Lagana notes that the 10th District spans a large geographic area, from the wealthy inner suburbs of McLean all the way out to the West Virginia border in Clark County. It will be important for everyone to participate in the primary process so their voices are heard and counted.

If you would like to support the FCDC, they are holding their biggest annual event, the Jefferson/Obama dinner this Sunday May 6th at the McLean Hilton in Tysons Corner. Registration is open to all, and Lagana encourages people to come hear what is happening across the county and help raise funds to support the critical job of helping to get out the vote. Special guest will be Senator Tim Kaine, who is up for reelection this year, along with Lt. Gov. Justin Fairfax. FCDC will be tipping its hat to the blue wave election of 2017 by having newly elected Democratic Delegates introducing the keynote speakers.