(Apr. 25, 2018) Catherine Read interviews David Reynolds, Jr., Executive Director of Vienna Jammers, a percussion ensemble in the Vienna area with over 120 youth musicians aged 8-18. Their mission is to educate youth through unique percussion programs, provide a dynamic and diverse experience in the performing arts, nurture the creativity of every child, and enrich lives within the community. 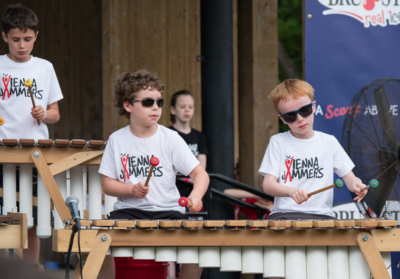 Vienna Jammers was established in 2005 as an after school program at Vienna Elementary School, where David Reynolds serves as a Music Educator. Dave Cohen, then a high school student and percussionist at James Madison High School, approached Reynolds about starting a percussion ensemble for elementary school aged children as part of a service project he was looking to launch. The after school program gained much notoriety, and began performing out in the community at high profile places like Wolf Trap Center for the Performing Arts and the Verizon Center during a halftime show. By 2013, Reynolds had upwards of 70 children wanting to participate in the ensemble, with slots for only 20 children available. So he started exploring ways he could grow the program and expand participation.

Reynolds knew of a similar, well-established percussion group based in Louisville, KY called the Louisville Leopards. He reached out to their director, Diane Downs, to see if he could learn more about how their program operates. He took off on his spring break that year to visit the group and learn as much he could about their program. Diane was generous with her time, and helped Reynolds learn how he could move the program from being an after-school program to more of a community based organization. Reynolds returned home, and shortly thereafter established the Vienna Jammers as a 501C-3 nonprofit organization. They were able to grow their participation exponentially, and they now have 120 students ranging from 8-18 participating in a number of ensembles.

The students play on a wide variety of instruments; traditional drums, steel drum sets, bongos, marimbas and even trash can drums. Reynolds notes that percussion is a very easy entry-point to making music – it doesn’t require any special training or instruction to pickup a stick and start banging on a surface. Of course, he notes there is a difference from banging on a table and making music, and that is what they focus on teaching their students. 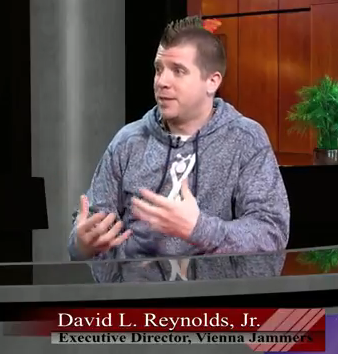 Vienna Jammers offers a robust summer camp program, which serves as an introduction to the instrument, as well as an audition to participate in the yearlong ensemble programs. They have two different tracks for students to choose from with the yearlong program, where students can practice either once a week or twice a week, depending on their interest and commitment level. The organization is continually looking for opportunities for the musicians to perform. This year the group traveled to Atlantic City to perform at a conference for Music Educators, at a volunteer reception held by the Mayor of Vienna, as well as at the Vienna Halloween Parade. They also seek out opportunities to bring music to those in the community who would otherwise not be able to get out and see them. The ensembles performed this year at Jill’s House, a home for special needs children in Vienna, and a number of retirement communities in the area.

Vienna Jammers operates year-round, with a 9-month program that coincides with the school year, and a robust offering of summer camp workshops. Students pay tuition, but it doesn’t cover all of the costs needed to operate the organization. Reynolds notes that they receive grants from The Arts Council of Fairfax, as well has having a number of corporate sponsorships to help subsidize costs. He also shared that scholarships are available if students are interested, but do not have the financial resources to make the tuition payments. Additionally, tickets are now on sale for their annual performance called the Big Jam, to be held on May 6th at 4pm at James Madison High School in Vienna. Come on out to support the Vienna Jammers and to hear some fabulous music that will lift your spirits!