(May 21, 2018) Catherine Read sits down with Senator Dick Saslaw (D-35), Virginia’s Senate Minority Leader, for a wide-ranging discussion covering the upcoming proposed budget with a potential of Medicaid Expansion, gun violence legislation in the wake of yet another tragic school shooting in Santa Fe, TX, and the prospect of increased funding for both education and transportation. 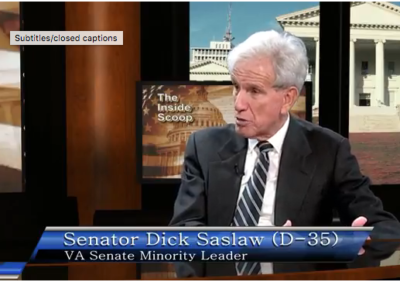 The discussion began with Senator Saslaw explaining the biennium budget process in Virginia. Every two years a budget gets introduced, and eventually passed through the General Assembly, then ultimately laid on the Governor’s desk for signature. Virginia will pass a budget that will be effective July 1, 2018-June 30, 2019. The makeup of the Assembly is quite different this year after last November’s blue wave, and the parity achieved in the House of Delegates led to a budget that included expansion of Medicaid under the Affordable Care Act. This provides relief and hope for the approximately 300,000 low-income Virginians who do not qualify for Medicaid because they earn too much money ($16,000 for an individual), yet cannot afford private insurance.

Through the Affordable Care Act, if Virginia opts into the program, the state will receive funding from the Federal government to cover 90% of the cost to cover these 300,000 individuals. Hard working Virginians have been paying into this program through their federal income tax since the inception of the ACA in 2012, yet because the General Assembly has not opted into the program, Virginia has left money on the table and is essentially funding the other 32 states (plus DC) who have adopted Obamacare (ACA).

By accepting the approximately $3 billion in federal funds, money is freed up for other state initiatives like across the board pay for K-12 teachers and state employees. As of today, the House budget (which includes adoption of Medicaid expansion) does not match the Senate version (which has not adopted the program). Examples of the budget differences include $170 million that would need to be cut from K-12 education and 106 million from higher education. These cuts would be catastrophic for students and teachers across the commonwealth.

Republicans have opposed participating in the ACA for the past 6 years because they claim that if the Federal government defaults on its promise to pay for the care, then the state would be stuck carrying the cost. This argument doesn’t hold muster because written into the budget is a “kill switch”, stating that if the feds default, then states can withdraw from the program with no penalty. Additionally, the Supreme Court of the United States has upheld that they cannot mandate states to carry on with the program if the feds renege on their responsibilities. This is why there are 32 states (plus DC) currently participating in the program, including conservative states like Kentucky and Indiana.

The Senate Finance Committee has been meeting regularly to try and hash out details, but if the budget cannot get moved out of committee for a vote on the floor, then Sen. Saslaw stated he will need to utilize the “nuclear option” (discharging the Senate Finance committee), something he does not take lightly and is hoping he does not have to do. If they can get the budget to the floor, he states that they have enough votes (19 Democrats and 2 Republicans) to get the budget passed with Medicaid expansion. The question will be how exactly it will all unfold. Budget amendments have already been negotiated with their counterparts in the House, so should the budget make it to the floor for a vote he anticipates a smooth process thereafter. If the General Assembly does not pass a budget by June 30th, then the government would shut down, something he says is unacceptable and irresponsible. 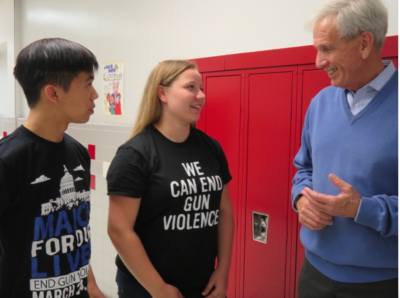 In the wake of yet another tragic and senseless school massacre in Santa Fe, TX, Senator Dick Saslaw speaks to gun violence prevention bills that have been introduced in Virginia. Unfortunately, none of the measures designed to protect Virginians; from universal background checks to banning bump stocks, passed through the body this year. The GOP are still in control of both the Senate and the House, even though it is a thin majority, and they have the power to make both committee assignments and to control where bills get assigned. For example, if they want a bill to not pass through a certain committee, it might get reassigned to the rules committee (where everything goes to die). He adds that the only solution to ensuring that reasonable measures get passed through the legislature is to vote in a majority of lawmakers who are committed to working on this issue.

Senator Saslaw points to a statistic that he says speaks for itself. The United States has 4.4% of the world population, yet it has 43% of the world’s guns in circulation, not counting military and police. He claims it is pretty simple and obvious, more guns are going to equal more fatalities. The only way to curb the violence is to put common sense measures in place to help protect innocent lives. Catherine adds that it is important to reframe the issue as a public health crisis. If people were dying at this rate from any other cause we would be scrambling as a nation to figure out how to save their lives.

In the next segment of the show, Senator Saslaw speaks about funding initiatives for both education and transportation. Relative to education, he explains that funding levels are finally back to where they in 2008, after massive cuts to education during the Great Recession. This, however, does not account for inflation, or the fact that we have far more students enrolled in the system. As previously noted, should the General Assembly pass a budget with Medicaid Expansion, then money is freed up in the General Fund to put towards investments in education.

Across the board pay increases of 3% for K-12 teachers would take effect July 1, 2019, which is a measure that both the Virginia Education Association and the American Federation of Teachers are in favor of. As of today, Virginia ranks 35th in the nation on teacher pay. If the Northern Virginia region were pulled out of those statistics, Virginia would rank 50th in the nation.  Senator Saslaw believes we can do better for our teachers and students by committing to properly funding our educational system, and bringing the pay to a competitive level so we can both attract and retain talent.

In regards to higher education, the additional funds that are proposed would help lower tuition at the 4-year Universities, as well as make significant improvements to the Community College system. The investment in community colleges would provide critical pathways to well paying careers, for students who are not going to attend a traditional four-year college. There are many careers with thousands of job openings, but not enough people to fill those positions. Today in Virginia, there are 36,000 job openings in cyber security alone. These workforce development plans would yield win-win results for both citizens and employers. 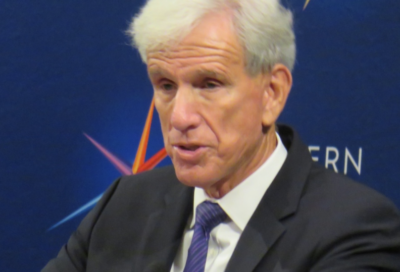 This year, the General Assembly passed a Transportation Funding Bill that fell in line with what the LaHood Commission recommended for funding of Metro improvements and maintenance. Virginia’s share of the commitment includes a budget appropriation of $154 million to go towards the $500 million a year that is needed to keep the system functional. In addition to metro funding, there was money appropriated, mostly through local governments and the Northern Virginia Transportation Authority, to fund road construction. Some of that money will be funded through a 1% increase in the hotel occupancy tax (going from 2 to 3%), along with an increase in the Grantor’s Tax from 15 cents per $1000 to 20 cents per $1000.

The original proposal by Senator Saslaw included an increase of the Grantor’s tax to 25 cents per $1000, which was widely supported by the Virginia Association of Realtors. Unfortunately Del. Tim Hugo, who convinced his entire caucus to vote against the increase, derailed this measure. To give an idea of what the difference in the Grantor’s tax meant, on the sale of a $1 million home, the cost would increase by $1000. By not raising the revenue through the Grantor’s Tax, the burden for road construction will be shouldered by localities, which is ironic since the money for road improvements is desperately needed in Del. Hugo’s home district of Clifton/Chantilly.

In the final segment of the show Senator Dick Saslaw discusses his positions on redistricting, which is slated to happen in Virginia in 2021. Gerrymandering and redistricting has been a hot topic of late, with several cases currently being heard in both federal and state courts. Senator Saslaw fully supports an independent commission to redraw the districts, but wants to make sure that when that commission is formed, it is truly impartial. The members of the General Assembly currently draw their own districts, and would need to pass a constitutional amendment to change that process. In order for an independent commission to be effective for the 2021 redistricting, legislators would have to pass a constitutional amendment in the 2019 session, then again in 2020, because a constitutional amendment requires that it pass twice, with an intervening election and a change of legislative body in between votes.

If a ruling comes down from the Supreme Court in the Wisconsin case of Gill vs. Whitford, which was heard last fall, then the landscape of how districts are to be drawn could dramatically change not just in Wisconsin, but nationwide. The “test” for congressional district is that it must be “compact and continuous”. Recent years have seen politicians use big data to draw themselves ideal boundaries, designed to keep themselves in power. That is why Senator Saslaw supports non-partisan redistricting, to make the process more fair and transparent. Stay tuned to the headlines to better understand where things might be headed in Virginia for the 2021 redrawing of districts.