(March 6, 2019) Catherine Read interviews Darlene Williamson, founder of the Stroke Comeback Center.   Their mission is to provide ongoing and personally meaningful programs within a peer-driven environment that is affordable for all stroke and brain trauma survivors, enabling them to achieve their maximum potential.

Darlene Williamson is a speech and language pathologist whose career is focused on stroke recovery, specifically with patients who suffer from aphasia.   Stroke is defined as an interruption of the blood supply to the brain for a significant period of time. Aphasia is the loss of language that happens when the language center of the brain is injured. Survivors who are plagued with this condition have full intelligence and the ability to think, however, the language center of brain keeps them from being able to communicate with those around them. There are approximately 2 million people nationwide who are living with the aphasia today, and there are very few programs that are specifically geared toward helping these patients with long-term recovery.

Williamson was prompted to found the Stroke Comeback Center after her experience of working with patients in the hospital and rehabilitation setting. Since insurance only covers a short period of time as an  in-patient, she would often need to say goodbye to them after their insurance coverage ran out. Her patients would inevitably ask “What’s Next?” and she never had a truly good answer, as there were not many places for them to go to continue on their recovery journey. 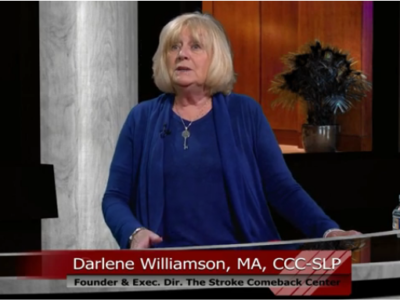 The Stroke Comeback Center program is different from what patients experience in the hospital or rehabilitation settings. They offer classes and activities, facilitated by professionals, which allow individuals to work toward goals that they have chosen for themselves. Williamson explains that this approach allows the survivor to define what “living successfully” means to them, whether it be skyping with their grandchildren on a video call or being able to order their own Starbucks drink with a cashier. The classes encourage communication and give patients an opportunity to practice their skills and develop camaraderie with those who are in a similar situation.

The flagship location of the Stroke Comeback Center is in Vienna, VA. The center has grown tremendously over the years, thanks to a combination of grants and individual donors. Classes are offered at an affordable rate, and financial assistance is available for those who need aid. The need in the community has been so great, that they opened a second location in Rockville. There are now efforts underway to expand into Loudon County via a partnership with the Community Foundation of Northern Virginia. The Stroke Comeback Center is the only community based non-profit that does this in the DC metro area, and they are working hard to serve the 1 in 250 people who are affected by aphasia.

Looking toward the future, Williamson hopes to setup a virtual center so they can serve people in remote areas, or those who lack transportation to travel to their centers. This form of tele-rehabilitation would allow a patient to video call into a group therapy session, such as a conversation group or a book club.

The Stroke Comeback Center strives to meet the needs of as many people as possible, but in order to do so they need funding. They are holding a fundraiser called The Benefit of Chocolate on March 28th at Columbia Country Club in Chevy Chase, MD. Eventually, Williamson would love to expand programming to include fitness and music therapy to round out their class offerings.  Sponsor information and registration for this fun and unique event can be found on their website – she encourages anyone who is interested to attend.