(Feb 21, 2018) Sandy Evans is the Fairfax County School Board member from Mason District. She has been on the FCSB for 8 years after having first been elected in a special election in March of 2010. She and Catherine Read take a look at the issues facing Fairfax County Public Schools, the nations 10th largest school system.

Sandy Evans started out as a parent advocate, supporting the PTA of her daughter’s school. When her daughter entered middle school Sandy Evans was made aware of the then early start times for Fairfax Country middle and high schools. Seeing the early start times as a serious health issue, she cofounded SLEEP (Start Later for Excellence in Education Proposal) and then ran for the school board. In Fall of 2014 the school board approved the change of high school start times from 7:20 AM to 8:10 AM starting in the Fall of 2015. Currently, Sandy Evans and SLEEP are advocating for later middle school start times as well.

Currently, Sandy Evans is the budget chair of the school board, and they are currently debating the school superintendent’s proposed budget ahead of an expected early February vote to send the budget to the Fairfax Country Board of Supervisors. The new budget makes a priority of creating new teacher pay scales in order to make the country more attractive for talented teachers. While the new pay scales will take time to go into effect, more than 54 million dollars have been set aside in the current budget to raise teacher salaries into the new scale. The current overall budget is 2.9 billion dollars providing services for over 188 thousand students.

The members of the school board have also been working with legislators in Richmond to try and increase state level support of the county schools in support of special need, ESL (English as a Second Language) and impoverished students. Currently, about 25% of FCPS students qualify for free or reduced cost meals, 29-30% need ESL services and 14% qualify for special needs. These numbers are currently expected to grow going into the future, and local community support is not expected to be enough to fill the gap. The current state funding formulas mean that Fairfax County Public Schools receive less funding proportional to their size in spite of the fact that over 54,000 students qualify for free or reduced price meals, a number equal or larger than many other school systems entire enrollment in some parts of the state. 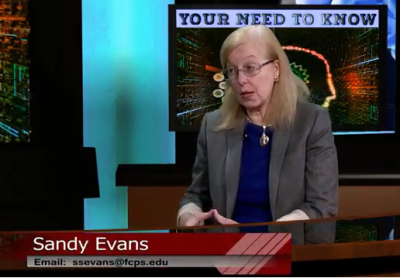 ding schools with high poverty rates will be offered laptops which they can take home and use, then return at the end of the school year. FCPS have also recently put their Parent Liaisons on contracts to work full time as opposed to their older hourly system. Parent Liaisons are particularly important in schools with high ESL or poverty rates, which frequently have either no or underfunded PTAs, having a person dedicated to communicating with parents and providing translation services to ensure that parents feel welcome to speak concerns and keep informed of how their children are doing.

Talks have also been on going about using schools as a platform for community services. The school board has been in talks with County Supervisor Penny Gross about building a new school in the Wilston area which could potentially be combined with a health facility or a public library to provide services to the population at large while reducing costs for students in particular.

The school board has also recently made changes to the school discipline system. They’ve aimed to replace out-of-school suspensions with in-school suspensions overseen by people versed in restorative justice and positive behavior approaches. They’ve also attempted to speed up the process of informing parents of troubled students, and Sandy Evans wishes to make that process even faster going into the future.

In July, the Fairfax County School Board voted to change JEB Stuart High School’s name. The public suggested 73 different names but failed to produce a majority opinion. The school board took the five most popular names and picked Justice High School. Students attending the school were allowed to pick their new mascot and following a school-wide vote chose to become the Wolves. The school board has allowed 2 years to make the transition to the new name, but the school superintendent expects the process to be finished by next fall.