Back in high school, gay people did not roam the halls in all their awesome gayness assured of acceptance by understanding teachers, administrators and students. We did not have GLEE, Modern Family or Ellen to model what it meant to be gay in America in the 1970s. Gay students were afraid. They lived in fear of others finding out.  My best friend Jeff – to this day I still consider him my best friend – shared that with me when he finally came out to me in our 30s. I couldn’t understand why Jeff didn’t tell me sooner – why he thought it would make a difference in our relationship.  But this is something I can never fully understand – I can never truly stand in his shoes and see the world the way he lived it in a hostile, unaccepting, homophobic world of Roanoke in the 1970s. 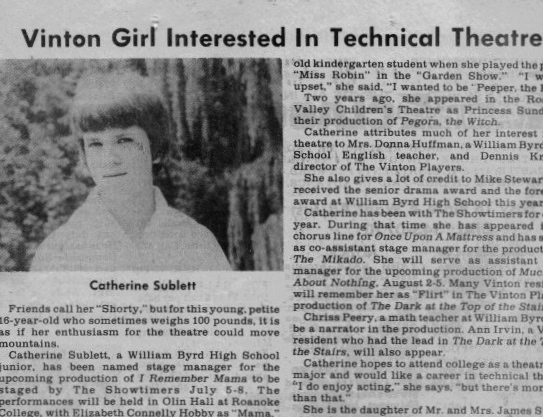 Although I didn’t know that three of my closest friends in high school were gay at the time, I did have gay friends I met through community theater. I belonged to the Vinton Players and to Showtimers. The very first openly gay man I ever met was when I was 14 years old and he was teaching an acting workshop in Vinton. His name was Jim and I remember him fondly for being a great mentor, friend and director.  I was often his stage manager  and he taught me most of what I know about theater production. Jeff & I were  frequent guests in the home he shared with his partner Morris, and as I navigated through my  adolescence, it never occurred to me that there was anything wrong with who they were or how they lived.

Lee Cruise, a man I loved dearly, was a frequent cast member in Showtimers productions and sometimes appeared in drag at fundraisers held at Roanoke’s nicest gay bar – The Park – which opened in 1978. I went there with Jim and with Lee and it was a great place – a safe haven then. I regularly ran into people I knew there who were clearly not living out of the closet. I could not understand, even at that age, why this was such an issue for hetrosexual people.  Gay people take nothing away from the community – in fact they add so much! This is how I saw the world as a young teenager living “down state” in southwest Virginia.

I left for Emerson College in Boston in August of 1980. I had two theater scholarships, a Pell Grant, student loans and a work study grant that would pay  $4.25 an hour.  I got on a Greyhound Bus with $20 cash, my steamer trunk and typewriter, and waved good-bye to my family as I started on a 15 hour bus ride that would land me in the first major city I had ever been to on my own.  I was homegrown, right off the farm so to speak, had never traveled much and was not very sophisticated about how the rest of the world lived. (Many funny stories about that.)

The first week of school at Emerson, I met Jonathan.  He presented as a woman and the other students referred to him as a “transvestite” because that’s the only language we knew.  And we only knew that because of the Rocky Horror Picture Show. Today he would be called transgender.  Back in 1980, it was startling for most college students to see a very beautiful and smartly dressed woman in their midst only to hear someone whisper “THAT’S Jonathan!” I think about how courageous and brave he was to live as his authentic self in world where he had no role models at all – among a tribe of adolescents who were so self conscious about our own identity that we could hardly fathom what his gender switch meant to us. 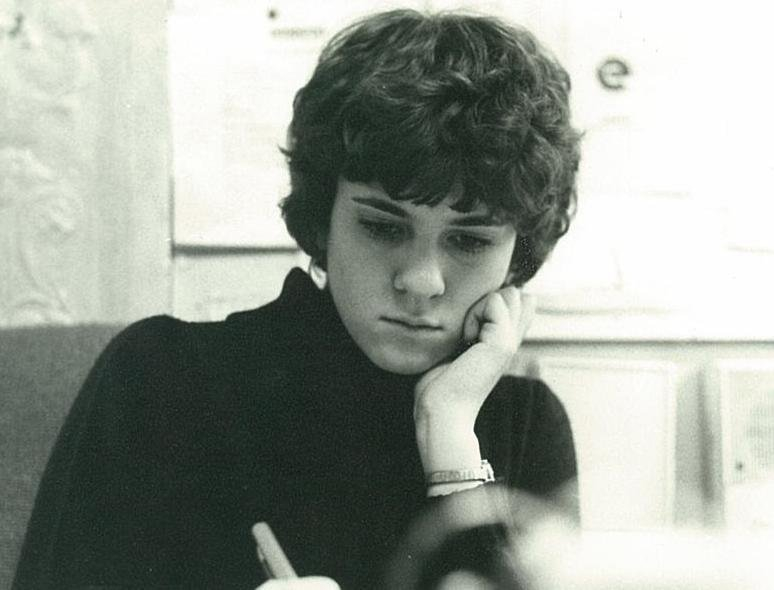 Jonathan and I had only one class together – Freshman Acting.  The first time the professor told us to pair off for a particular exercise, I could feel the tension in the room as everybody held their breath that they would not end up with Jonathan. I also felt my own immediate pang of anxiety that he would be the only one there with no partner at all and would be humiliated by the rejection.  So I went right over and asked if he would be my partner and he said yes.  And from that moment forward, we were partners every time an exercise came up that required pairing off. I got to know Jonathan a little more because he was a frequent visitor in our dorm and my workstudy job was as the desk receptionist where every visitor had to be signed in by a resident.

One of the saddest things I ever saw my freshman year at Emerson was Jonathan with his parents at a cookout on Parent’s Weekend.  He was dressed in khaki slacks and a tropical print shirt and didn’t look like himself at all. He looked strange and foreign not dressed in his usual sophisticated chic outfit with full make-up and sporting amazing accessories. I wondered what his parents actually knew about who he was. And that made me sad too.  I did not return to Emerson the following year, but I heard from others that he got a place off campus with his good friend Ann and was going by the name Robin.  I wish we all knew then what we know now and had supported Jonathan better.

So that brings me to the present and why I am a “straight ally,” an LGBT Activist and  a member of the Board of Directors of Equality Virginia. There are so many facets to this.  It’s about social justice and equality under the law. It’s about eliminating prejudice and discrimination – in healthcare, employment, schools and our community.  This is about recognizing that we should not have “second class” Americans because of sexual orientation or gender identity. In a very personal way, this is about honoring the people I love, and have loved, and not allowing the society we live in to grind them under the heel of its boot.  I will not stand silently by and allow others to create laws, restrictions and constitutional amendments that deny the LGBT community the life, liberty and pursuit of happiness to which they are entitled as Americans. Part of that pursuit of happiness is the legal right to marry.  It is my goal to inspire others to see why this matters to all of us. In taking a stand in the r/evolution that is coming to America for our LGBT brothers and sisters, we raise ourselves up and everyone around us.

That is my message on Monday night to those who want to be part of our community of “straight allies” for the LGBT community.