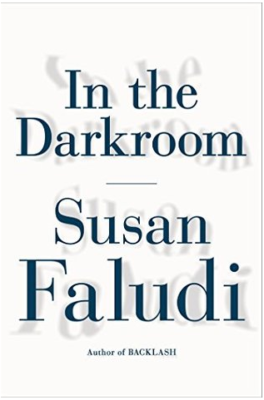 (Feb. 2017) This book is so many things. At its most basic, In the Darkroom is an exploration of identity. It’s also an intimate account of a daughter’s reconnection to her parent after decades of estrangement. That reconnection came in the form of an email from her father Steven Faludi that was signed, “Love from your parent, Stefánie.” The email announced that at the age of 76, her father had undergone sex reassignment surgery in Thailand and was now a woman.

I have more than a passing understanding of the multifaceted aspects of gender identity. And yet . . . Susan Faludi takes the question of identity to a whole new level and shows the many layers and overlapping aspects of how we see ourselves. Gender is only one of those facets that creates our sense of self. And she explores how gender can also be conflated with other aspects of identity, like Jewishness.

Faludi is a researcher, writer and journalist and a well known feminist too. Yet, I was not familiar with any of her other books or articles before reading this one. She gives a thoroughly researched account of the science and psychology around the work of early “sexologists.” In 1919 in Berlin, [Magnus] Hirschfeld established the world’s first institute to study sexuality, which issued one of the earliest scientific reports on transsexual surgery.

Yet Hirschfeld espoused an ethic directly at odds with the dualism that would come to prevail in the United States later in the century. “The number of actual and imaginable sexual varieties is almost unending,” Hirschfeld wrote in 1910. “In each person there is a different mixture of manly and womanly substances, and as we cannot find two leaves alike on a tree, then it is highly unlikely that we will find two humans whose manly and womanly characteristics equally match in kind and number.”

And there we have it in 1910 – the concept that gender is on a spectrum and is not just a binary.

There is also a fascinating chapter on how feminism and feminists have dealt with the question of transgender women. That has been quite an evolution and she pulls from many published works to show just how varied and passionate the views are among transwomen themselves.

This book also provides a fascinating history of Hungary. While that was most unexpected, I enjoyed learning the history of this country through the story of her father’s life and his family’s history there. It is the most personal of journeys through a country’s long and fraught existence and it comes to life through the impact it had on individuals whose stories emerge through Susan’s relentless pursuit of surviving family members. END_OF_DOCUMENT_TOKEN_TO_BE_REPLACED 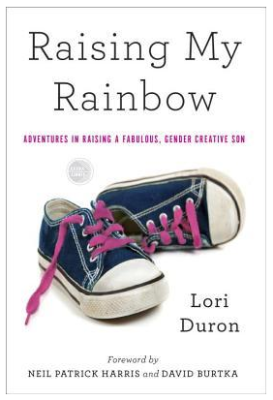 (July 1, 2014) “Children are desperate to know that they are loved and accepted by their parents. You need to make the decision that your child’s happiness and safety is totally unrelated to his sexual orientation. The one place that kids cannot be afraid is in their homes.” – Judy Shepard, co-founder of the Matthew Shepard Foundation.A wonderful book that should be read by every educator and anyone else who works with children. And parents. Definitely parents. I listened to the audiobook which was read by its author, Lori Duron. The book is based on her blog of the same name, “Raising My Rainbow.” It chronicles her journey with her gender non-conforming son CJ, his older brother Chase, her husband Matt, and their extended family and friends. She started the blog when she discovered in her extensive Google search that there was no information out there about pre-school boys who preferred all things girly. It’s heartbreaking at points as she helps her son Chase navigate relentless bullying at school because of his younger brother’s perceived sexual orientation. She describes how he handled a situation on the playground at the age of 7 when another child observed that his 4 year old brother liked to play with “girl toys.” His response was, “Yeah. He’s gender non-conforming.” And he went on with his play. Lori observes, “The bullies, predators, haters and gossips in life move in circles. They sniff out the smallest scent of fear and strike. When there is no fear, those people lose their power. Their power goes back to the rightful owner.”  END_OF_DOCUMENT_TOKEN_TO_BE_REPLACED

Back in high school, gay people did not roam the halls in all their awesome gayness assured of acceptance by understanding teachers, administrators and students. We did not have GLEE, Modern Family or Ellen to model what it meant to be gay in America in the 1970s. Gay students were afraid. They lived in fear of others finding out.  My best friend Jeff – to this day I still consider him my best friend – shared that with me when he finally came out to me in our 30s. I couldn’t understand why Jeff didn’t tell me sooner – why he thought it would make a difference in our relationship.  But this is something I can never fully understand – I can never truly stand in his shoes and see the world the way he lived it in a hostile, unaccepting, homophobic world of Roanoke in the 1970s. END_OF_DOCUMENT_TOKEN_TO_BE_REPLACED