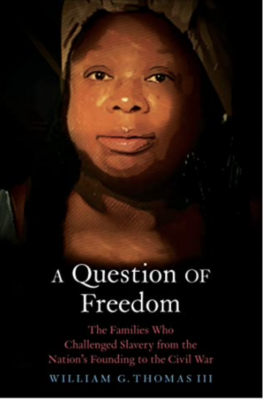 (Oct 2021) This book landed on my radar because it’s written by historian William G. Thomas III, brother of my husband’s law partner Sandy Thomas, who is the global managing partner for Reed Smith LLP.

It’s a tremendous work of scholarship. It is also a story well told with plenty of plot twists. The meticulous recounting of court cases, depositions, legal records, and oral histories is skillfully woven into the riveting stories of people, families, and history that have not previously been explored in such depth.

Willam Thomas discovers in researching the subject of Georgetown University’s sale of their slaves to fund their college back in the 1830s that his family also owned slaves in the same area of Prince George’s County, Maryland. His journey of discovery unfolds as he meets descendants of the families he writes about who sued for their freedom in the late 18th century to the mid-1800s.

It was emotional for me to read about the very real trauma, injustice, and cruelty suffered by families who were enslaved. That injustice was perpetrated by white families like the author’s and my own who accepted the institution of slavery as both a legal right, an economic necessity, and part of the natural order of life.

The book delves into the plantation system, the economy of tobacco and cotton, the vast holdings of Jesuit priests, banking instruments that allowed the mortgaging of human beings as property, the recessions and market collapses that fueled the expansion of slavery in the south. These concepts are brought to life through the stories of individuals with names, extended family histories, and accurate details captured by legal cases and property inventories that included enslaved people as assets.

The legal wins in the early freedom suits set up some branches of a particular family for generations of success as they flourished in Maryland and northern states. The failures of the legal system to see enslaved people as people with fundamental rights relegated others in those same families to a life in the deep south with generations of poverty and struggle. The Jesuit priests who bartered the souls of 292 people have much to answer for.

William Thomas has written an important book that is so fundamental to understanding the trajectory of our country’s history around slavery and the intractable racism that impacts all of us in our daily lives. He has also uplifted the stories of courageous people that history rendered invisible up to this point. The Queens, Mahoneys, Bells, Duckets and so many others deserve their place in our country’s founding story.

This is one of those books that I wish was on everyone’s reading list. It’s part of a journey of understanding, acknowledgment and healing. And our country desperately needs to be healed.

A Question of Freedom - Wm G Thomas III - A people centered history of enslavement in MD & DC and the legal cases that freed some families prior to the Civil War.