(July 29, 2019) Catherine Read sits down with civil rights activist Shirley Ginwright for a candid conversation about racism in America. Ginwright is a long-time community activist, serving as the President of the Fairfax NAACP and as the chair of the Communities of Trust in Fairfax from 2014 to present.

On the heels of inappropriate and racist comments by the President of the United States, Trump is set to visit Virginia to mark both the 400th anniversary of the Virginia legislature and the arrival of African slaves to its shores. After fighting racism for six decades, Ginwright is discouraged about the current state of public discourse. She feels as if we are taking steps backward, as opposed to moving forward, in our acceptance and understanding of our checkered past.

Ginwright acknowledges the importance of teaching children about our nation’s history, and not whitewashing our past. White people primarily write history books, from a white person’s perspective. She proposes having students read books written by black authors so that they get a full understanding of our history.

She recently had a conversation with a white college professor of history, who acknowledges that by reading books written by African American authors, she is able to open her mind to the breath and depth of our past.  This helps her understand things from a different perspective, which enables her to relate better to her students.

In the second segment of the show Ginwright discusses how issues are framed differently in public discourse when it comes to race. She uses the example of drug epidemics in two different circumstances. Back in the 1980’s, there was a crack cocaine epidemic that primarily impacted African American communities in the inner cities. At the time, the answer from politicians was to crack down on the “thugs” who suffered from addiction, and treat them as criminals. This led to a ballooning prison population,with a disproportionate impact on communities of color. 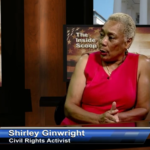 Fast-forward to recent years, and we now have an opiod epidemic afflicting mostly white communities across the nation. Today, politicians are taking the stance that this is a public health crisis that deserves both money and attention. Instead of treating these people as criminals, as they did in the past, the conversation has shifted to trying to help these victims survive and recover.

Yet, at the same time, African Americans are still serving outrageous sentences for drug crimes from decades past. Additionally, minorities are disproportionally sentenced to jail for marijuana possession today. There are still true inequities in the system that deserve attention.

Another timely topic that we have debated in recent years is whether or not schools, roads and buildings should be named after Confederate soldiers. With Virginia being the capital of the confederacy, we still have a number of these throughout the commonwealth.

Most recently, JEB Stuart High School in Fairfax was renamed Justice High School. It is especially ironic that the population of this school is majority minority. Ginwright believes that the names should be changed because we should not be honoring the memory of people who stood for the inequities of the past.

As we grapple with the hard questions about our history, and attempt move the needle forward, Ginwright encourages everyone to consider equity and encourage representation. She uses the example of jury duty. She has never been called for jury duty, which begs the question – is there equal representation on juries in communities throughout the country? In the classroom, are there enough minority teachers for children to look up to? These are all important questions, and she urges us all to think about these issues.

Ginwright emphasizes that the only way things can change is if we elect people who accurately represent our values. Local politicians have great sway over policies in everything from the classroom to the police force. Virginia has elections for virtually all local offices this November. She encourages all Virginians to make a plan to vote and ensure that their voice is heard.