(June 4, 2018) Catherine Read interviews Delegate Patrick Hope (D-47) of Arlington to discuss the recent passage of the Medicaid Expansion in the Virginia General Assembly, as part of the biennial budget signed by Gov. Ralph Northam.  Del. Hope currently sits on the the General Laws, Courts of Justice and Health and Welfare Committees in the House of Delegates, where he is able to lend his professional expertise from his career as a healthcare attorney.  Del. Hope also serves on the Joint Commission on Healthcare and the Deeds Commission, which has been tasked with studying and making recommendations on improvements to Virginia’s mental health care delivery system.

Del. Hope was elected to office in 2009, one year before the Affordable Care Act, otherwise known as Obamacare, was passed into law. Under the ACA, Washington allows states to open their rolls to people with income up to 138% of the federal poverty level, which is $16,750 for an individual and $28,700 for a family of three. The federal government agrees to pay 90% of the cost of expanding the rolls, totaling approximately $2 billion a year.  These are dollars that Virginians have been paying with their federal taxes that will now be returning home.  Baked into this year’s proposed budget is a tax on hospitals in Virginia, which is designed to cover the 10% cost that the state will be responsible for.

Since the adoption of the ACA in 2010, Hope has advocated for expanding Medicaid, and bringing these federal tax dollars back to the commonwealth for individuals who fall in the “gap”. This gap exists because as the program works today, Medicaid in Virginia has a very low-income threshold for eligibility – $6900 for a family of three, $9700 for a disabled individual, and able-bodied childless adults are not eligible at all, no matter how poor they are. Therefore, insurance on the ACA marketplace was not accessible to the 300,00+ working poor citizens of Virginia. 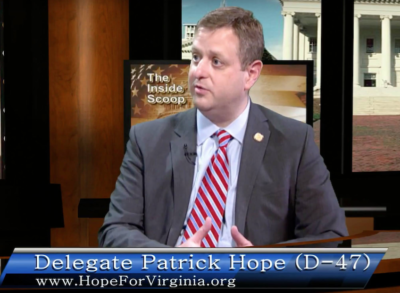 Effective January 1, 2019 this will all change. The influx of federal dollars to provide healthcare to those in need will free up money in the biennial state budget to invest in other important initiatives. Teachers will receive a 3% pay raise, all judgeships will be fully funded (and 30 judgeships will be added to cover increase caseloads), and state employees will get a 2% pay raise. Money will also be allocated to improve mental health services, as well as addiction and substance abuse programs throughout the state. Del. Hope points out that these are important investments in our safety net and our future.

The adoption of Medicaid expansion will also be a big boost to the state’s economy. By bringing 300,000+ residents onto the healthcare rolls, we will need to find healthcare “homes” for all of the new patients. More doctors, nurses, support and administrative staff will be needed to accommodate the increase in patients. These will be new, well paying and sustainable jobs that will help drive the economy forward.

In order to bring Republicans on board with adopting Medicaid expansion, there are several provisions that were incorporated into the new law. Work requirements will be imposed on all able-bodied adults age 18-55, to ensure that nobody is getting a benefit without putting effort into finding or training for work. The program is called the Training, Education, Employment and Opportunity Program (TEEOP), and will have to seek approval by the Trump Administration before it can be implemented. Del. Hope praised the bipartisan work in the House of Delegates, who included Medicaid expansion in their original proposed budget, along with the hard work and brave efforts of Sens. Emmett Hangar (Hanover), Frank Wagner (Virginia Beach ) , Jill Holtzman Vogel (Faquier) and A. Benton Chafin, Jr. (Russell) who propelled the Senate to move the budget forward with Medicaid expansion included.  There will be much work to be done to get the program off the ground, but passage of the budget was the first step of the process.