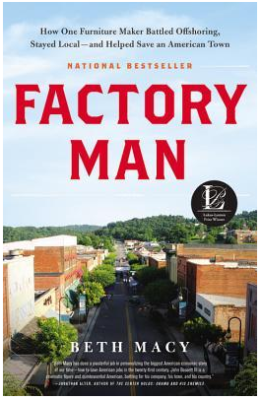 I can’t say enough about the skilled research and writing that went into this book. Beth Macy comes from a manufacturing community in Ohio where her mother worked in a factory making lights for airplanes. She made her home, geographically and journalistically, in Roanoke, Virginia, working for the Roanoke Times. The book grew out of a series of articles she did for the Roanoke Times on the plant closings throughout Southwest Virginia – which was once the economic engine of the Commonwealth in the early to mid 20th century. She credits the photos of freelance photographer Jared Soares for inspiring that series of articles. It was his images of Martinsville and the people living there that made Beth Macy go searching for the answers to what happened there and why.

The Bassett family history is intriguing in a way that old Southern families often can be. It is intertwined with the history of Henry County, the Smith River, Martinsville, Galax and the company town of Bassett. The old family names synonymous with that area – Vaughan, Stanley, Bassett, Lane – appeared on furniture found in homes across America for most of the 20th century. The story of how all of that changed with Chinese manufacturing and the “globalization” of the furniture industry is a cautionary tale.

The book is riveting. The cast of characters is well drawn and by the end of the book I had the family tree well in hand. I believe that Beth Macy was fair and balanced in giving family members an opportunity to have their say if they wanted. Not all of them did. I didn’t sense that she tried to make John D. Bassett III either more, or less, than the person he is. That person is larger than life. What he managed to do was a modern day Herculean effort that is not universally admired, but very much appreciated in the small city of Galax, VA (population 7,000)

Factory Man deserves the many accolades it has received from reviewers across the country. The book is a great story well told. It is solid reporting on complex issues of economic theory, industrial evolution and social change. The bonus is that it reads like a great novel. I highly recommend that you read it before Tom Hanks produces the HBO mini-series. The book is always better!