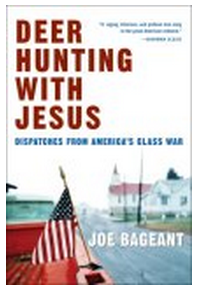 Subtitled: Dispatches from America’s Class War. This book is still relevant and important despite it’s publication date of 2007. Joe Bageant wrote this before Obama was elected, but the vast majority of what he has to say is still very true. Some of it has been true for hundreds of years. I saw myself in his stories and I saw the people I grew up with too. Bageant is a born again Virginian. He’s a native of Winchester who spent four decades in Oregon and found enlightenment. He returned to his hometown and childhood friends in the early 2000’s and chronicles what he sees as the great political divide that keeps the most disadvantaged among us at the bottom of the food chain. I don’t agree with every conclusion he comes to and some things have changed a bit with Obama in the White House. If anything, it’s heightened, sharpened and widened the gap between liberal and conservative thinking in this country. We are even more polarized than we were 8 years ago. Joe is a great storyteller and he appreciates a well turned phrase. There are numerous “quotable quotes” that resonated with me.He points out that “Slightly over half of all the poor people in the United States are white. Poor whites outnumber all other poor minorities combined . . . There are at last 19 million poor and working poor whites and the number is growing. By the way, most poor people work. About one half find employment for at least half the year. Public assistance accounts for only one quarter of the income of poor Americans.” I don’t know the numbers in 2014, but the recession only made those numbers worse.Bageant does not mince words. He’s plainspoken and forthright in his observations. “Meanwhile, for the people, it is football and NASCAR and a Republic free from married queers and trigger locks on guns. That’s what they voted for: an armed and moral Republic. And that’s what we get when we standby and watch the humanity get hammered out of our fellow citizens – letting them them be worked cheap and farmed like a human crop for profit. Values have jack to do with politics. But in an obsessively religious nation, values remain the most effective smoke screen for larceny by the rich and hatred and fear by the rest.”He points out that college educated liberals have a way of talking only to each other or talking online. I often feel there is a bubble that provides nothing more than an echo chamber for us to rant to one another. He summarizes by saying “Now more than ever, the middle class cannot see the working class and the working class can’t see past the next basketball playoffs. True to the working class sports culture aesthetic they remain spectators to politics.”The intervening years have seen a rise of the Tea Party. They did not exist when this book was written. Bageant passed away in March 2011 without telling us how the Tea Party conservatives have impacted what he had to say in this book. (Or if he did, I haven’t seen it.) Fundamentally, he’s gotten it right. There is an historical context he covers here citing Senator Jim Webb’s book “Born Fighting” and how the Scots Irish Calvinist Fundamentalism is still a strong factor in the culture of rural Americans. He gives corporatism the space it deserves and speaks of our lives as seen through a hologram. He covers the importance of how education and homeschooling has impacted the upcoming generations and their perceptions as well. This really is a good book for me to read right at this precise moment. I grew up in rural southwest VIrginia and left it as Bageant did. I am the educated white liberal he speaks of and yet I want to be a person who understands where I came from and how the people I grew up with see the world. I’m on their side. And yet there is this enormous divide that makes it almost impossible to find the common ground we need to reach in order to work together toward common goals. I call this a “must read” if you care about making your community and your world a better place. We have to do more than thinking we are “doing good.”