(March 25, 2019) Catherine Read sits down for an in-depth discussion about the federal budget with Mike Murphy, Chief of Staff for the Committee for a Responsible Federal Budget (CRFB).   The CRFB is a non-partisan nonprofit that believes a budget should be a statement of a nation’s values and priorities, as well as a statement about what type of country is passed down to the next generation. The goals of the CRFB include educating the public, public officials, and policy makers about the importance of addressing the debt; and to advocate for fiscally responsible policymaking.

The CRFB has a campaign right now called “Fix the Debt”. It is simple in its messaging, but encompasses many important priorities. Murphy breaks down the components of the budget for Catherine, and why the time to act is now. He acknowledges that when regular people think about the enormity of the federal budget, it can seem out of touch and people have a hard time relating to it.

Murphy likes to equate the federal budget to something simpler, like a family budget. When a family decides to take on debt to buy a house, they generally make decisions based on what they can affordrelative to what they earn. The federal budget is pretty much the same thing, just on a much larger scale. When doing a family budget, sometimes there are tough decisions that need to be made.  If a family cannot afford something, than they cannot have it. He believes that there are currently no decisions being made on a federal budget level, and America is borrowing at an alarming rate.  When the bill finally comes dues, there will be many issues of how to handle the problems that will ensue.

Today the federal budget is approximately 4.4 trillion dollars. There are two types of spending in the federal budget- mandatory spending and discretionary spending. Mandatory spending includes programs that are set in place by law and Congress does not have much say in making decisions about it. These include Social Security and Medicare benefits, as well as programs like the Affordable Care Act (ACA) and Medicaid. This accounts for between 60-70% of the overall spending. The remaining 30% is discretionary spending, which is decided by Congress. These include agency budgets, defense and all other spending categories and initiatives.

Over the past 40-50 years, the ratio of the mandatory to discretionary funding has reversed. It used to be that 70% of the budget was discretionary, which gave lawmakers much more flexibility in planning and deciding on budget priorities. Today, only 30% of the budget can be changed. This is currently the Congressional budget period, as lawmakers are to be putting their budgets together in order to make a resolution by April 15th. 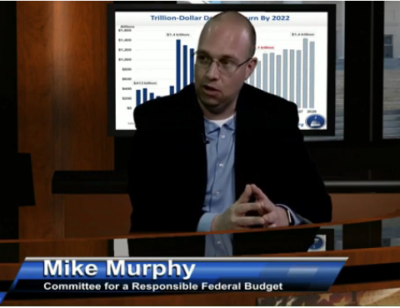 On the revenue side, Murphy shares that approximately half of the revenue comes from individual income taxes, about 35% from payroll taxes (Social Security and Medicare withholdings), and the remainder comes from other miscellaneous taxes collected by the IRS.

A deficit occurs when the annual spending is greater than the annual revenue. Today, that annual difference amounts to $900 billion a year. In February alone, the federal deficit was $230 billion for that one month. The federal debt is the accumulation of past deficits. Today, the Gross National Debt is $22 trillion dollars, and if we continue to operate under the current system it is expected to grow by $10 trillion over the next 10 years.

Those are some big numbers. How can people wrap their heads around this, and why is it important? Murphy explains that as this debt grows, the government is required to pay interest on the money that is being borrowed, much of which is from foreign countries. Interest payments are the fastest growing expense in the federal budget. By 2032, America will be spending more on interest payments than they do on all federal programs for children.

If the deficit spending is not addressed now, it is a monster that will continue to grow. From an economic standpoint, more public debt that is accrued will slow growth and wages over time, and can lead to higher interest rates for consumers. Additionally, there are national security reasons as to why America should lower its debt. The more the country spends on interest, the less it can spend on other important initiatives.

As the country accumulates more debt, it is limiting its “fiscal space” and might not be able to borrow for a national emergency. Additionally, borrowing from other nations can lead to potential geo-political problems. And lastly, from a moral perspective, the CRFB believes that passing this kind of burden on to the next generation, simply because they are not willing to make hard choices, is simply wrong.

Murphy shares that the unwillingness of Congress and the federal government to take this issue seriously, and get the budget in line, is symptomatic of a dysfunctional system that is not working properly. Congress continuously kicks the can down the road, but has not made any hard decisions about the deficit spending in many years. Recently, Murphy attended a conference of high school kids from around the country. He posed a couple of questions to them about the current political climate, and their answers very much mirrored public opinion polls conducted over recent years.

First he asked how many of the students believed that the polarization in our society is threatening our way of life. Almost every hand in the auditorium of 1000 students went up. The Pew poll that asked the same question showed that 87% of those questioned also felt the same way. The second question he posed was a little more radical. He asked how many of them believed that the current polarization could lead to a civil war? About 50% of the hands went up. When Rasmussen asked the same question, about 30% of the respondents said that they thought it was a possibility.

Murphy believes that this indicates that there is a hunger for a conversation about moving past the current political divide in order to address the root causes of these problems.

In the final segment, Catherine and Mike talk about myths surrounding the federal budget. It is important to understand the facts and why they are true.

If you stop and think about your own personal consumer debt, than it is not to hard to understand that you cannot borrow indefinitely without there being some sort of consequence. In the case of a federal budget deficit, the result can be significant inflation.

Myth #2: Tax Cuts Pay for Themselves

Those who are proponents of tax cuts will try and make the case that the tax cuts will spur growth, and the tax revenue collected from the growth in the economy will cause the cuts to pay for themselves.  This has historically shown not to be true.

Myth #3: We Can Solve the Budget Deficit by Only Taxing the 1%

In conclusion, with the federal debt rising every day, the country is on an unsustainable path. Today the federal deficit sits at 78% of the total economy. If an individual was planning their own personal budget, would they have a mortgage that required them to spend 78% of their income?   Historically, when the debt was at a more manageable level it has lived in the 35-40% range. The only other time in our history that it has been this high was during World War II. If the current trends continue, the debt will be 100% of the total economy within the next 10 years.

With an aging population, there will be fewer people working and paying into the system, and more people who need benefits. The Social Security Trust Fund is projected to be insolvent by 2034. Now is the time for lawmakers to sit down and begin the serious work of coming up with a plan of how to address these problems.   These conversations will be deep, and they will need to come to the table with an open mind and an open heart. Trust will be the key to finding a workable solution. Trust in one another, and trust that one side will not abandon their word if a compromise is reached.