(Nov. 14, 2018) Catherine Read sits down with the Hon. Mary Margaret Whipple, Vice-Chair of the Virginia Women’s Monument Commission. The commission was established back in 2010 to explore the idea of honoring historic women who have many significant contributions to the commonwealth. Over the past 8 years, the commission has come up with a design plan, secured land on the Capitol Grounds, and raised money to finance the monument. “Voices from the Garden” will be the name of the new monument, and it will seek to educate Virginians about women who might not be household names, but have made significant contributions in their lifetimes.

One of the ideas that resonated with the commission was to make the monument something that people could relate to and even interact with. The 12 women who will be honored will be cast in bronze statues that will be standing or sitting on benches in the space. It is meant to imply that these women were regular people who walked amongst us, making their mark in everyday life. They did not want these women to be set up on pedestals. There will be walls surrounding the garden that will tell the amazing stories of each women who is honored, and they will also be adding names to the walls in future years. The one caveat is that people who are honored will need to be deceased for 10 years, in order to ensure that their accomplishments stand the test of time. 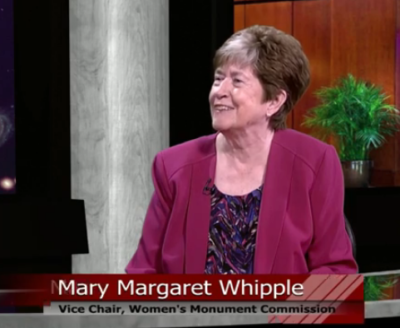 Once the design selection was made, the commission focused its attention on choosing the women who would be honored. They worked together with a committee of scholars of Women’s Studies programs throughout the state. It was critical for them to have geographic and ethnic diversity in representation. The women who are being honored are not necessarily household names, but have made significant contributions in our state and throughout society. A complete list of the women can be found on the website.

The commission has raised $3 million of the $3.8 million needed to complete the monument. A small fraction of the money was given by the state, but the balance has been raised through individual donors, foundations, corporations and banks. In order to begin work on the project, they needed to have enough money in the bank to ensure that the project could move forward. The groundbreaking took place on December 4, 2017 and then Gov. Terry McAuliffe attended and gave the keynote address. Production is in place for 4 of the bronze statues, and as money is raised the remaining statues will be put into production. Whipple has a fundraising plan in place to raise the balance of funds by February 2019, so that the dedication can take place as scheduled in October of 2019. She welcomes any donations, large or small, which can be made on the website.