(June 17, 2019) Catherine Read speaks with Laurie MacNamara, the first female President of the Democratic Business Council of Northern Virginia. (DemBiz).  Their wide-ranging discussion covers everything from the purpose of the council, to the programming and policy components of the organization.

MacNamara is the first female to head the DemBiz Council in its sixteen years of existence. Senator Scott Surovell, Laurie Blackburn and Kevin Cook founded the organization in 2003, when they recognized that the business owners with Democratic values were under-represented.  Their goal was to bring together business executives who wanted to advance issues that their workforce cared about, such as education, healthcare and affordable housing.

DemBiz provides opportunities for Democrats, like-minded independents and others to meet and network with other professionals, as well as with local, state and federal elected officials and candidates. Through a wide range of programming, from breakfasts to after work networking events, the Council aims to serve all who are interested in participating.

As MacNamara notes, in a local economy with essentially zero unemployment, it becomes a competitive environment to keep employees happy.  Employers are looking to do all they can to retain their staff. By collaborating with organizations like Equality Virginia , they are working to advance policies to make the workplace more inclusive. DemBiz aims to advance policies that workers are yearning for, such as paid family leave and inclusive LGBT workplaces.

The DemBiz Council is best known for its monthly breakfast meetings that are held at the Tower Club in Tysons Corner. Under McNamara’s leadership, however, she has sought to broaden the programming options.  She has also encouraged the Council to hold events around the region and during various times of the day – branching out to both Arlington and Loudoun Counties. Notable recent speakers include Michael Bloomberg and Mayor Pete Buttigieg.

Additionally, the council has hosted candidate forums in the recent elections. In 2018 they put on a robust candidate forum focused specifically on business issues for the 10th Congressional Seat (which was eventually won by Rep. Jennifer Wexton). The following year, in 2019, they hosted a forum for all who were running for the Chairman of the Fairfax County Board of Supervisors. The panels were informative, and they plan to continue these events in the future. 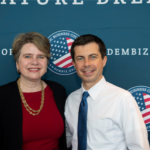 Other upcoming events include a discussion about Women in Politics, to be held at 1776 in Crystal City on June 20th. On July 17,  Nobel Prize winning economist Dr. Joseph Stiglitz will join the Council for a talk about the impact of economics on elections.  In September, former Governor Terry McAuliffe will be the keynote speaker who will discuss his experience of stumping for candidates throughout the state during the summer months.

MacNamara is proud of the work she has done in her two-year tenure to help move the organization forward. As the business community in Washington evolves, she aims to keep up with the trends. Her personal background is in Government Contracting, and while there are still many of these businesses in the area, the region has worked hard to attract new industries.

One of her new programming ideas is to have a DemBiz Annual Awards Banquet.  This would give the council an opportunity to recognize employers in the region who are promoting family friendly policies, like paid family leave, early childhood education and inclusive workplaces.

From the Amazon and Nestle headquarters in Arlington, to Hilton putting down roots in Tysons Corner, and Volkswagen landing in Herndon, area officials have worked hard to diversify the business base. Other employers such as INOVA and George Mason University are expanding and hiring more workers. Additionally, players like Virginia Tech, who are setting up their new innovation campus in Alexandria, are helping to fuel the growth of the region. Small businesses are emerging, and many of them are minority, women and veteran-owned enterprises.

All of these businesses have policy objectives that will help attract and retain their employees, and continue to make Northern Virginia thrive. The DemBiz Council has an entire arm of the organization dedicated to advancing policy initiatives on things like education, transportation and healthcare, just to name a few. McNamara encourages all of the members to get involved and add their voice in establishing policy objectives. She welcomes all who are interested to the table. www.DemBiz.org