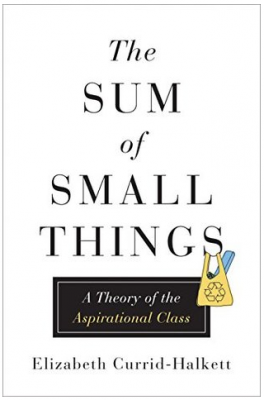 (Sept. 2017) The aspirational class members make decisions and establish norms that have far more pernicious outcomes for society than did previous leisure-class consumerism. Rather than buying silver spoons and going on long holidays, their investments in education, health, retirement, and parenting ensure the reproduction of status (and often wealth too) for their offspring in a way that no material good can. Through this reproduction of cultural capital and its trappings we see the emergence of what Charles Murray has called the “New Upper Class” and “New Lower Class,” which is not simply an economic divide, but is also a deep cultural divide that has never existed with such distinction as it does today.

I see an emerging body of work from various sources that have common threads running through them pointing to this same conclusion. J.D. Vance, in his memoir Hillbilly Elegy, describes his dawning realization that the other students around him at Yale Law School knew things about how the world worked that he had no idea about. The world in which those other students lived might be located in the United States, but it was a world way from where Vance grew up in the economically depressed Middletown, Ohio.

The author, Elizabeth Currid-Halkett, is a social scientist who has taken a great deal of research, data and anecdotal information and weaved it into a highly readable book meant for the general public. I applaud both the rigorous academic research necessary to formulate credible theories and also the academic who can then take that information and make it digestible for non-academic consumption. In order to talk about the bigger issues, we all have to understand the concepts and have a shared vocabulary to do so.

The book begins with the well known research and writing of Thorstein Veblen around the “conspicuous consumption” of the “leisure class.” She then walks us through the evolution of mass production and the democratization of consumer purchasing that removed the status symbols and brands that formerly marked the elite. What has replaced it is “inconspicuous consumption” among those with economic means to have more choices.

Conspicuous consumption among the rich has been replaced by “inconspicuous consumption”—spending on nonvisible, highly expensive goods and services that give people more time and, in the long term, shape life chances. These include education, health care, child care, and labor-intensive services like nannies, gardeners, and housekeepers.

I found the examination of breast-feeding to be particularly illuminating. That particular topic fits within the larger scope of “intensive mothering,” which is also part of this “inconspicuous consumption” that I have seen evolve in my lifetime. Without mandated paid leave benefits in this country for new mothers, women in better paying professional careers with companies that voluntarily provide those benefits have options in their parenting choices that other women simply don’t have.

As the journalist Hannah Rosen calculates, “Let’s say a baby feeds seven times a day and then a couple more times at night. That’s nine times for about a half hour each, which adds up to more than half of a working day, every day, for at least six months. This is why, when people say that breast-feeding is ‘free,’ I want to hit them with a two-by-four. It’s only free if a woman’s time is worth nothing.

Having economic means to make a wider range of choices has also given rise to what Currid-Halkett terms “conspicuous production.” From organic vegetables at farmers markets, to the artisanal farm to cup production of Intelligentsia Coffee, cultural capital is created in the choices we make. Where Starbucks made its fortune in bringing luxury to the masses, Intelligentsia makes its (smaller) fortune proclaiming its rarity. What drives the economic model in paying more for a product or service is how that feeds our personal narrative about who we are, what our priorities are, and how we see the world. Consumers’ desire for these less ostentatious forms of consumption is crucial to conspicuous production’s success.

There are themes in this book that intersect with those of Dream Hoarders by Brookings Senior Fellow Richard V. Reeves. That’s why I see this emerging body of work around cultural and economic issues as providing various threads that woven together give us a clearer picture of where we are and potentially where we are headed. There was even a reference in this book to The Primates of Park Avenue, which also looks at many of these same issues from a very different narrative perspective. Awareness is the first step in having a productive discussion about wealth gaps, education gaps, the lack of true social mobility and what seems to be the shrinking of America’s middle class.

This book is a good read. It will likely make you more self aware about your own lifestyle choices, along with heightening your awareness about the choices of those around you. It’s a fascinating look at the times we are living in.