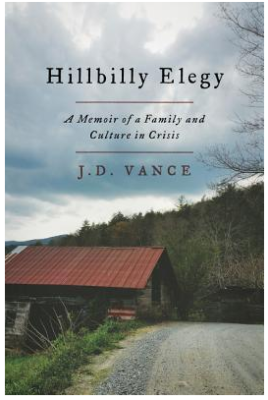 I wouldn’t have believed this young man of 31 could have such wisdom to impart to the world. But he does. It’s a book for this time we live in, for this contentious political atmosphere, for this generation struggling to find their path forward into the future.

J.D. Vance’s memoir makes a lot more sense to me because I recently read Dreamland: The True Story of America’s Opiate Epidemic written by Sam Quinones. His mother’s drug addiction follows the arc of an opiate epidemic that began in “pill mills” in Ohio, Kentucky and West Virginia after the powerful prescription drug OxyContin hit the market in 1996. The author was 12 years old at the time.

His Mamaw and Papaw who grew up in eastern Kentucky ended up in Middletown, Ohio, following the steel industry’s recruitment of workers from that region post WWII. Married at the ages of 14 and 17, they had a tumultuous marriage that was exacerbated by his Papaw’s alcoholism. While his mother’s home life and that of her siblings was chaotic, his grandparents ended up providing what little stability J.D. had in his young life. His mother’s addiction and her string of five husbands and constant relationship partners created chaos in his own life that overshadowed everything else. Combined with a town whose economy was in decline, his future seemed bleak. He credits his Mamaw with supporting him in a way that made it possible for him to see a future that wasn’t evident as he was growing up in such difficult circumstances.

This is a well written book that is searingly honest and profoundly self aware. It resonated with me. I understand the family chaos and the impact that it carries from one generation to another. While my family doesn’t quite fit the “hillbilly” mold, I recognize these people in his life.

I think the description of the book is accurate: part personal story, part sociological analysis and some keen observations about what social policies and government programs can and cannot do. It’s well written and I was captivated by what J.D. Vance has to say. Ultimately, he is an optimist as well as a realist. I wish I could put this book into the hands of every high school student in the country. There is some real truth telling here.