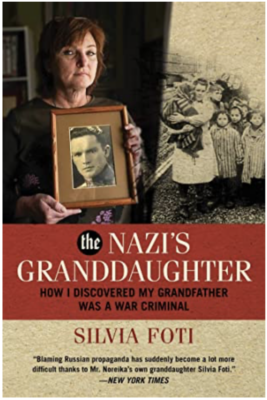 (March 2022) I read this book in anticipation of interviewing the author Silvia Foti for the show Inside Scoop on Fairfax Public Access which broadcast on Monday, March 21st. This interview was prompted by a virtual event hosted by the Virginia Holocaust Museum in Richmond, Virginia, on May 5, 2022. One of the founders of the Virginia Holocaust Museum is a Litvak-American survivor, Jay Ipson. The fact that 95% of Lithuanian Jews were exterminated during the Nazi Occupation makes descendants of survivors few and far between.

Joining author Silvia Foti for this event is Grant Gochin, who is descended from Lithuanian-Latvian Jews who escaped the Holocaust but whose family members did not. Grant Gochin has spent more than 25 years researching what happened to the Jews of Lithuania. He uncovered the fact that Jonas Noreikas was responsible for the murder of Jews in Lithuania years before his granddaughter Silvia figured that out.

This book is so well written and so accessible to those of us who are not historians or academics. We travel on this journey of discovery along with the author as she tries to piece together what she always believed about her grandfather against mounting evidence about who he was, what he espoused, and what he did. He was hailed as a national hero for his resistance to the occupation of Russian Communists in Lithuania, but not held accountable for his role in the wholesale murder of nearly the entire population of Lithuanian Jews.

I love the fact that the chapters of the book are punctuated by official responses from the Genocide and Research Centre in Lithuania to a lawsuit brought by Grant Goshin against the Lithuanian government regarding their recognition of Jonas Noreikas as a national hero. He continues to pursue that case through the international judicial system.

It was very moving to hear from both Silvia and Grant about how they connected. It took courage for the granddaughter of a Nazi collaborator to reach out to the grandson of Holocaust survivors and expect him to take her call. He did take that call and what has ensued is both a collaboration seeking truth and justice as well as a genuine friendship. They have a unique story to tell and it’s not finished.

I highly recommend this book. History becomes the provenance of those who control the narrative. We have experienced that here in Virginia and it’s true around the world. As William Faulkner observed, “The past is never dead. It isn’t even past.” And we can see how that is unfolding as Vladimir Putin attempts to twist the narrative of his invasion of Ukraine even as it is unfolding.

We must bear witness to the truth of history. This book shines a light on facts that have been buried too long. Silvia Foti has crafted a fascinating book that allows us to walk alongside her on a journey into her past and toward the beacon of truth for the Jews of Lithuania.