(July 30, 2018) Catherine Read interviews Angela Peabody, Executive Director of the Global Women’s P.E.A.C.E. Foundation (GWPF) about her work to help eradicate Female Genital Mutilation (FGM). This practice is very common amongst those of Somali, Liberian and Ethiopian decent. Although culturally accepted amongst many in these communities, this practice is a barbaric abuse and is now a class two felony in Virginia as of July 1, 2018.

Over the past several years Angela has worked tirelessly to raise the profile of this issue. FGM is a widely accepted practice that is devastating to the women who have suffered from this abuse. Based on the Population Reference Bureau’s estimate, there are approximately 513,000 women who are affected by this practice in the United States, with over 30,000 of these women residing here in the Washington DC metro area. Working together with Sen. Richard Black, Peabody was pleased to see the General Assembly pass the bill this year criminalizing this practice.

The Global Women’s Peace Foundation has two major goals with its work in this arena. First they aim to prevent any woman or child from having to be subject to the horrific and life altering practice. Second, they aim to educate communities, schools and the medical profession about the practice of FGM, who is at risk, and how to understand warning signs.

The abusive practice of FGM, where girls and young women suffer from the forceful amputation of their clitoris, is barbaric. Peabody points out that there is no religious justification for this in Christianity, Islam or Judaism. It is simply a culturally accepted practice in certain cultures. Catherine speaks with FA Cole, a brave survivor who has undergone reconstructive surgery thanks to the Global Women’s P.E.A.C.E. Foundation. She shares the painful details of her story, which to this day brings her to tears. She is thankful to have found Angela, and for the emotional and monetary help and support that both she and the organization have provided so FA could regain her life, and try to move on. 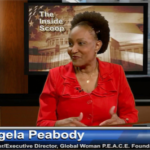 Angela notes that raising the profile of this practice through education is very important. She recently gave a presentation about FGM at a local church in Springfield, VA, after which a woman approached her and shared a story. She spoke about a young girl in her neighborhood who recently ran out of the house screaming that her father was trying to do this to her. The neighbors called the police, after the father came running out of the house with a knife, and trying to force her to come home. When the police arrived, they did not understand anything about this practice.

Since that time, Angela has not been out to speak with Loudoun County (VA), Fairfax County (VA) and Montgomery County (MD) police forces to educate them about FGM. She has also spoken at the FBI, and aims to work in conjunction with the medical community and educators so they can recognize warning signs. These presentations are being done to help protect these girls and young women. Those most at risk are between the ages of five and fifteen years old.

The Global Women’s P.E.A.C.E. Foundation is having their fifth annual fundraiser walk on October 27th in Washington, DC. This year they will also have walks in sister cities to help raise money and awareness. The group aims to increase support services for survivors, including counseling, job search assistance and the opportunity for survivors to seek asylum if they are not already citizens.