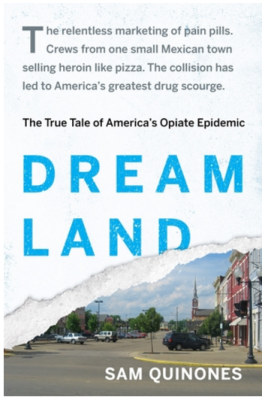 The fascinating cast of characters includes Virginia’s own John Brownlee, US attorney for the western district in 2006, who filed the first law suit against Purdue Pharma, the maker of OxyContin, for criminal misbranding. “Purdue Pharma pleaded guilty to a felony count of ‘misbranding’ OxyContin. To avoid federal prison sentences for its executives, the company paid a $634.5 million fine, among the largest in the history of the pharmaceutical industry at the time.”

Gov. John Kasich of Ohio figures prominently in this story and what he managed to do in Ohio is a case study in why Medicaid Expansion is critical to funding successful drug rehabilitation programs and why legislation was necessary in order to shut down the “pill mills” that were the root of the problem there. His program Start Talking! brought the opiate epidemic in Ohio into the public conversation.

I loved the story of how the Scioto County Coroner in Ohio, Terry Johnson, ran for the Ohio House of Representatives and won in 2011. Working with another representative who was a pharmacist, Dave Burke, they wrote House Bill 93. “For a month he and Burke worked in the shadows like French resistance fighters. They forged a bill that defined and regulated pain clinics. Their House Bill 93 made it illegal, among other things, for a convicted felon to run one.” Together, Ohio Republicans and Democrats repealed the state’s intractable pain law, unanimously, in May 2011 and it was immediately signed into law by Gov. John Kasich.

One of the most fascinating aspects of the book is how the millions of prescriptions for pain killers created an industry for cheap heroin in 25 states across the country. The Xalisco Boys, as they became known, didn’t use the drug. They delivered it like pizza using cars, pagers, cellphones and eventually a central call center in Mexico. These farm boys were driven by poverty and lack of economic opportunity in their own country to sell drugs in the US. They worked hard and made good money here and it all went back to fund their lives in Xalisco. Quinones walks us through how they created “the internet of drugs” using a loosely collaborative model of a distributed network. There were no kingpins or cartels. It’s organized like a sales organization – and runs well.

I highly recommend this book. It is a jaw dropping, eye opening, mind blowing time travel through the last 30 years of a drug epidemic that has affected almost exclusively the white population of the United States. This is a part of our country’s narrative that deserves a close examination.