(Oct 25, 2017) Catherine Read talks with Lynn O’Connell, Executive Director of Computer CORE, a non-profit providing work force development through computer training, and Evelyn Woodard, a Computer CORE graduate who is now an instructor. This volunteer driven organization was founded in 1999 to provide computer literacy training to low income individuals and they served about 48 students per class. In 2007, the Board of Directors of Computer CORE made the decision to focus on a broader workforce development curriculum and expanded their resources to serve more students.

Currently, Computer CORE has seven training sites as well as the ability to provide on-site training for other organizations. They serve about 260 students annually, and part of this program is providing these students with refurbished laptops. They are a Microsoft Certified Refurbisher and they welcome donations of computer equipment, laptops, flash drives and binders. Providing students with a computer to use at home that is loaded with the software they are learning in class, is critical to their long term success. It is also a necessity for job today’s job search. 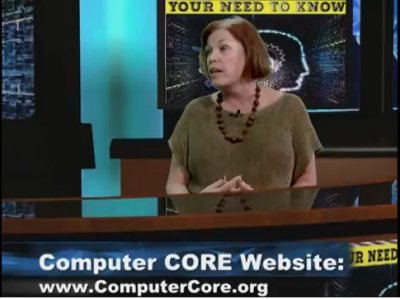 Lynn O’Connell explains that this is a volunteer driven organization with volunteer instructors who bring with them a skills based expertise. While most instructors say on for an average of 3 years, Lynn says there are instructors who have been with the program longer than the 10 years she has been Executive Director. She also explains that there is a great diversity in the educational levels of these adult students as well as a diversity in the languages spoken. Many students come in with an advanced degree but lack computer skills and a familiarity with the job search process in this country. Computer CORE classes offer a variety of skills based training including assistance in developing a good resume and practice in role playing job interviews.

Evelyn Woodard was referred to Computer CORE by her brother who was a volunteer instructor. The majority of students find their way to this program largely through word-of-mouth referrals like this one. While she was initially intimidated in the early days of learning the new computer technology, she stayed with it and completed the course. She actually changed jobs during her initial course and explained to her new boss she had a commitment to be on time to the class two nights a week. Her boss not only encouraged her in completing the course, but when she did, she was given a raise. Evelyn has now returned to Computer CORE as a volunteer instructor and she believes in the value of what this program has to offer.

Computer CORE collaborates with other non-profits in the Northern Virginia area to provide on-site instruction to the people they are serving. One of the organizations they work with is Friends of Guest House, which helps formerly incarcerated women return to their communities. Computer skills are an important part of workforce development and training.

For more information about Computer CORE, visit them at http://ComputerCORE.org