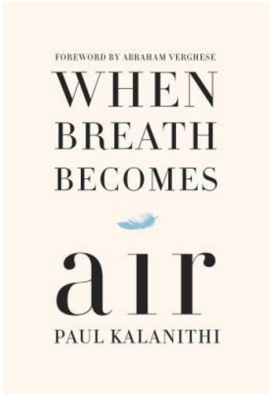 “Lucy and I both felt that life wasn’t about avoiding suffering. Years ago, it had occurred to me that Darwin and Nietzsche agreed on one thing: the defining characteristic of the organism is striving. Describing life otherwise was like painting a tiger without stripes. After so many years of living with death, I’d come to understand that the easiest death wasn’t necessarily the best.”

To read this book is to spend precious time with 36 year old neurosurgeon Paul Kalanithi as he wrote of his life in the last months of it. His wife Lucy write in the Epilogue: “This was the life he was given and this is what he made of it. When Breath Becomes Air is complete just as it is.”

Paul had an undergraduate and graduate degree in English Literature which is reflected in the beautiful prose of his memoir. He masters the art of the compelling turn of phrase, rendering concepts so beautifully and so memorably.

In considering a choice of summer jobs in college between a primate lab and working at a summer camp, he ponders: “If the unexamined life was not worth living, was the unlived life worth examining?” He was clearly a deep thinker all of his life.

His choice to go into medicine was a surprise that came to him in graduate school, despite the fact that both his father and brother are physicians. In retrospect, his choice of neurosurgery was a perfect marriage of his life of the mind with the biology of the mind. It was something that evolved through his graduate studies and final thesis.

Paul came to understand deeply the implications of his work as a neurosurgeon. “People often ask if it is a calling, and my answer is always yes. You can’t see it as a job, because if it’s a job, it’s one of the worst jobs there is.” END_OF_DOCUMENT_TOKEN_TO_BE_REPLACED 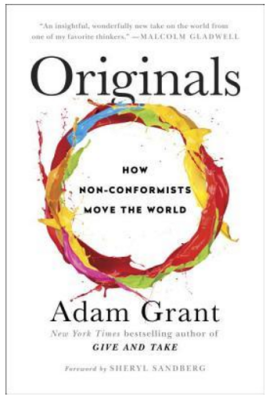 One of the most remarkable sections of this book is titled “The Narcissism of Small Differences” and went into a deep dive about the Suffragist Movement from 1855 to 1918. Grant examined the hurdles faced by the early pioneers – Lucy Stone, Susan B. Anthony and Elizabeth Cady Stanton. They were together, then splintered, aligning themselves with other advocates and movements. It was a tumultuous period and a history we need to understand. Such “small differences” are felt within groups – not nearly so strongly between disparate groups. Coalitions, collaborations and alliances are critical to movements and seismic change and we have to recognize how to align interests and groups to be more effective. END_OF_DOCUMENT_TOKEN_TO_BE_REPLACED

This show discusses the challenges of providing services to an aging population, many of whom are living in residential settings rather than institutions. The first segment features Shauna Severo, BSN, M.A.I.S., the Assistant Director of Patient Care Services for the Fairfax County Heath Department and Sharon K. Lynn, the Director of the Fairfax Area Agency on Aging. They discuss the services provided through county agencies and how families can access those services.

The second segment features Melissa Batchelor-Murphy, PhD, RN-BC, FNP-BC. She is an Asst. Professor at the Duke University School of Nursing and an RWJF Nurse Faculty Scholar. Dr. Batchelor-Murphy specializes in geriatric nursing with a focus on the nutritional challenges of those suffering from dementia. She has done extensive research in this area and has developed effective techniques for helping dementia patients with eating related issues. More work needs to be done in supporting families and care givers in meeting the nutritional needs of aging adults with cognitive disorders.