Dec. 21, 2011 – I loved this book! I heard Tom Peters speak in Georgetown just after this book was published. I admit I’m a fan of his from the In Search of Excellence days. I like the format of the book – short chapters, memorable nuggets of information, lots of stories, amazing-random-fascinating information. LOVED his chapter on the women’s suffrage movement! This book is so infused with every aspect of Tom Peter’s personality. There are many who many not like the bold type, exclamation points and repetitiveness – but I think it’s a great book and worth the investment to read it.

Oct. 29 2011 – This is a fantastic book by Simon Sinek. An easy read – very engaging and interesting and it makes so much sense! The companies he profiles are well known – Microsoft, Apple, Southwest airlines and others. He makes a very convincing case for the important of knowing your “why”, articulating that purpose and building a culture around it. Too often we are focused on the “what” and the “how” and those things become meaningless when people no longer remember why they are doing it. One of my favorite Simon quotes: “Money is not a cause, it’s the result.” So true. The book is intended to motivate and inspire people to do what motivates and inspires them. I totally get that. Every person I know regardless of age, circumstance or profession would benefit from reading this book

June 2, 2011 – A fascinating book. A non-fiction account of a woman whose cells have furthered science and medicine more than any other single factor in the last 60 years. Journalist/author Rebecca Skloot spent over a decade researching the case of Henrietta Lacks, who entered Johns Hopkins hospital in 1951 where she was diagnosed with malignant cervical cancer. The cells from her tumor are the first “immortal” cells to continue to live in culture medium and have been used around the world for decades in breakthrough medical milestones like the polio vaccine. This story is a total page-turner. The author made it her life’s work to track down the remaining family and to tell the story of the woman responsible for HeLa cells and what became of her family. (Google HeLa cells – amazing!) I highly recommend this book!

May 26, 2011 – I was determined to finish this book before I heard author Guy Kawasaki give a presentation on it this morning in Arlington, VA. And I did. The book is excellent – very engaging. Guy did a great job in pulling the main concepts from his book for his presentation. Entrepreneur magazine hosted this seminar and if you have an opportunity to hear Guy speak, take the opportunity. The book gives very practical suggestions and actionable concepts that are within anyone’s reach. It’s very motivating and . . . well, enchanting in its own right. It’s centered around the effective use of social media tools to build community and cultivate influence, although it goes well beyond that. Guy Kawasaki is clearly a master at both. I recommend the book as a good investment of time and there’s a Facebook page if you want to keep up with the buzz around the book: www.facebook.com/enchantment 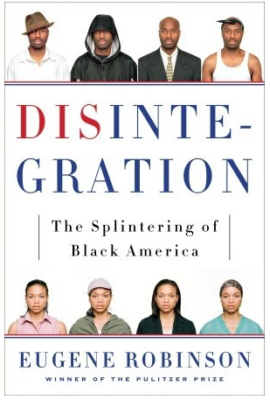 May 23, 2011 – What a wonderful book! I love Eugene Robinson’s columns in the Washington Post and I have heard him speak in person. He’s a remarkable man who brings a lifetime of thought and experience to a subject few people talk about openly. I was truly fascinated by his segmentation of Black America into 4 distinct categories: the Transcendent, the Mainstream, the Emergent, and the Abandoned. His research is well done, the writing is engaging and his stories are memorable. For those living in the Washington, DC, area, his descriptions of the history and culture of the various neighborhood will bring a new perspective on how the city has evolved in the last 40 years. I would highly recommend to anyone. It serves to enrich our understanding of our fellow Americans in a way they didn’t teach us in school.

Feb. 7, 2011 – “Bill Moyers interviewed author Joseph Campbell in 1988 shortly before his death and these were originally aired on TV. I downloaded this series of interviews from Audible.com and enjoyed listening to them on my iPod. I was familiar with Campbell’s iconic and often referenced book “A Hero of a Thousand Faces” and this is every bit as wonderful. Very inspiring. His mantra is “follow your bliss.” He certainly followed his from the time he was a young boy until his death. He is the authority on the history of myth. I highly recommend it.

Jan. 29, 2011 – This is an excellent Blackstone audiobook recorded in 2008. The print edition would be nearly impossible to find I think since it was originally published in 1951. Author William Raymond Manchester did his master’s thesis on HL Mencken in 1947 with the cooperation and support of his subject. Mencken arranged for him to get a position at The Baltimore Sun, where he himself had spent much of his career. Henry Louis Mencken is probably not remembered by many of this generation. Known as the “Sage of Baltimore”, he is regarded as one of the most influential American writers and prose stylists of the first half of the 20th century. He was also a vocal critic of the American political system and prone to outrageous opinions on almost every subject. Manchester spent a great deal of time with Mencken at the end of his life after he suffered a debilitating stroke that left him unable to read, write or articulate his thoughts.

The author’s affection for Mencken and his close personal relationship with him give this biography a dimension that is likely unmatched in other biographical treatments of Mencken’s life and works. I’ve always had a fondness for Mencken quotes and I loved learning more about his life through this very engaging and enjoyable biography!

Jan. 10, 2011 – Fantastic book by Clay Shirky who also wrote Here Comes Everybody. “Cognitive surplus” refers to the number of hours of leisure time we have collectively as a society. Post WWII, we spent our time watching television – passive consumers of media someone else created. Young people are now growing up in an environment that is highly connected and engaged and they both consume and create the media. Early on Shirky posits “Media is the connective tissue of society.” Then he lays out examples and research that support his viewpoint. One that stuck with me was understanding that people in different generations labeled “Boomer,” “X” & “Y” are not fundamentally different types of human beings. People essentially are driven by similar things, what makes the difference is means and motivation. We grew up in different environments and our experiences drive our viewpoints on many things – including social media, technology and privacy. I highly recommend this book. Shirky does a good job at shifting paradigms to show us a new way of looking at the role of social media – all media – in where we are and where we’re going.

Dec. 30, 2010 – Subtitled: The Unbeatable Impact of Truly Committed Managers. My personal pick for “Book of the Year” in 2010. The title is clever but unfortunate because many people will opt not to read it. It’s not a book about being a better manager. It’s a book about being a better human being. It’s about defining our values and helping others to define theirs. At it’s base, it’s about becoming a better leader. Along the way to achieving that, we learn how to be a better family member, friend, colleague and team player. I would recommend this book to every single person I know because there is something to be gained by every person who reads it regardless of age, education, job title or ambition. It was a fantastic book to close out this year and start planning for the next!

Dec. 3, 2010 – Subtitled: Set Your Own Rules, Live the Life You Want, and Change the World. I’m not sure if non-conformists are made or just *are* I tend to think we just *are* and it’s a life long struggle to figure out how to make it work. This is a great book for offering practical suggestions from someone who has chosen the road less traveled. Chris Guillebeau has done some amazing things, and he’s committed to living life his way and sharing what is working for him with others. It’s a great goal. And he points out that having a big goal is important. I loved the book and would highly recommend it to all non-conformists!