(May 6, 2019) Catherine Read sits down with the several key leaders of Network NOVA to discuss their third annual Women’s Summit “Taking Back Power Everywhere” to be held June 28-30 at the McLean Hilton in Tysons Corner.

In the first segment Catherine speaks with Katherine White and Robbin Warner to talk about the history of this summit.  Following the Women’s March, and in the lead-up to the 2017 Virginia statewide elections, a core group of women from Northern Virginia came together with the goal of getting more involved in local politics and supporting Democratic candidates. At the time, there were only 34 Democrats in the House of Delegates.   After floating an idea over happy hour one night, they pulled off the first summit with only 70 days of preparation. Their goal was to learn about and meet all of the candidates who were running for office in November of 2017, as well as to get training from experts in the field on issues from healthcare to the environment to transportation.

Relationships were formed, and the women worked their tails off that year to help elect Democrats to office. Their work contributed to flipping an unprecedented 15 seats in the House of Delegates, helping to balance the power in the lower chamber. This sea change, along with holding the Governor’s mansion and all three statewide seats, helped to force a vote on Medicaid expansion, as well as move the needle on several other issues like education and the environment.

In 2018 the group leveraged their successes to buoy three Virginia women to Congress. Congresswomen Jennifer Wexton (10th), Elaine Luria (2nd) and Abigail Spanberger (7th) were recipients of support from the women of Network NOVA, and won their respective races. All three women will be attending the summit on Sunday to meet with participants and share their experiences and lessons learned.

This year’s election is slightly different, which called for a different approach to the conference. While there are no statewide or congressional seats up for grabs, just about every local elected official in Virginia will be on the ballot. This is a fantastic opportunity to learn more about local government, and the people who run it. The entire first day of the conference will be devoted to local candidates and their issues. The second day will be focused on State Delegates and Senators, while on the third day the spotlight will be on national issues.

In the second segment of the show Catherine speaks with Krysta Jones of Vote Lead Impact (VLI). VLI promotes and recruits female candidates of color, and teaches leadership competencies. Jones is excited to a part of the summit this year to help advise on programming, and to help diversify the base of people who would be attracted to attend the event. 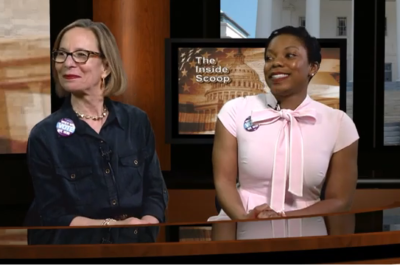 Briana Sewell of the VA Campaign for a Family Friendly Economy also joins Catherine to talk about why they are a sponsor of the Women’s Summit.  Her organization works hard to support women throughout their lifecycle, which in turn means that they are supporting Virginia families.  Their issues start with advocating for paid family leave and stretches to ensuring women are supported as caregivers, encompassing everything in between.  She is working with Network NOVA to help them establish an agenda for the summit that speaks to women of all genders, ages and races.

The cost of the event has been kept very low so that there is not a barrier to entry. There will be workshops catering to all types – everything from canvassing, candidate messaging, personal development and executive presence and imaging. The goal is to elevate these candidates and activists to the next level, and change the definition of who an activist can be.

For a full and up to date listing of all 45 breakout sessions, along with every scheduled speaker, visit the Network NOVA website for all of the details. Everything that you need is listed, from the candidates’ forums to Sister Simone of Nuns on the Bus to the Badass Grandmas. The women of Network Nova look forward to welcoming all who are interested in attending. Tickets are $139 for the three-day event, and can be purchased online. They were able to keep the costs low, thanks to the generous sponsorships of organizations like the Campaign for a Family Friendly Economy Virginia, Feminist Majority, Win Virginia and many others.