(Dec 6, 2017) Catherine Read interviews Stair Calhoun, founding member Network NoVA. Dedicated to involving women in politics, Network NoVA was founded by Stair Calhoun, Katherine White and other activists who had participated in the Women’s March of January 2017. These grassroots activists organized women in support of Democratic candidates for the Virginia House of Delegates election of 2017.

Following the 2016 Presidential election local women, including Stair Calhoun, sought to find ways that they could make their voices heard in politics. Seeking to make the biggest difference possible, they organized themselves into Network NoVA. Their organization has since gone from strength to strength organizing a Women’s Summit in June of 2017 and backing Democratic candidates in the 2017 election. Dedicated to keeping local people involved, their summit was organized by a group of 7 women in less than 70 days, but still had hundreds of attendees, including 30 state delegates or delegate candidates and a number of sponsorships.

Stair Calhoun attributes their success to both their willingness to innovate and the inability to take no as an answer. Network NoVA’s newness aided them in providing a place to try new ideas without the inertia of the old. They agreed to back any candidate whom they believed best represented the women of their district, regardless of their perceived chance of winning, and tried new techniques to encourage women to vote. They involved children in making personalized reminder cards, which encouraged women to make voting plans in advance to support of their motto “When we vote, we win.” Further, they produced more than 17 different short videos in support of various candidates. 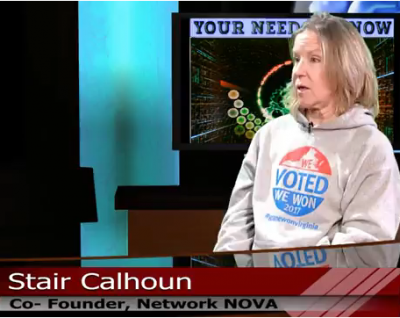 Currently, Network NoVa is working on contacting newly elected delegates to find out how to best support them, as well as creating plans to keep constituent pressure on legislators in Richmond on a range of topics including gun reform, the ERA amendment, Medicaid expansion and redistricting reform. To do this Network NoVa is creating VAPLAN, the Virginia Progressive Legislative Alert Network, a centralized way to keep people informed about what the state legislature is doing. They seek to create a system where people can check on what their legislators are doing on the issues important to them in an easy manner without being inundated with other information.

Network NoVA has partnered with a number of other organizations, including Democratic Promise, in order to try and reach out to rural Virginians. Democratic Promise is an organization based around the idea of reverse constituent services. They contact people in rural Virginia and seek to learn about the issues and problems they currently face, then put them in contact with the services that could solve them. They seek to keep politicians focused on local issues even between elections.

Going into the future, Network NoVA is seeking to expand their membership. They’ve already begun preparations for their 2018 Women’s Summit, and signups are already available. Topics at their June 23rd summit are planned to include how to get out the rural vote, Democratic Promise and the involvement of new technologies in elections. Network NoVA has also begun their initial planning for the 2018 congressional elections, where they seek to back Democratic candidates in the 1st, 2nd, 5th, 6th, 9th and 10th congressional districts, and even hope to support candidates in every district. Overall, they seek to get people involved in politics, while also seeking out the ways they can use Network NoVA to serve the needs of all Virginians.

To learn more about Network NoVA visit them at their website at networknova.org, you can follow them at Facebook, join their events via Meetup or email them directly at [email protected]

(April 18, 2016) Attorney and advocate Juliet Hiznay joins host Catherine Read for a discussion on Virginia’s status as #1 in the nation for juveniles referred to the criminal justice system. What has happened over the last several decades to bring us to a point where children as young as 8 are being charged with crimes? Juliet Hiznay describes it as “criminalizing childhood behaviors” which in our own youths were behaviors simple dealt with in an age appropriate way by school staff, administrators and our parents. Schools are increasingly turning to school resource officers and law enforcement personnel to “police” student behavior.

Data on who these students are include the unsurprising fact that race, disability and those with mental health issues are disproportionately represented in this population. Solutions must include better policies from the legislature as well as a change in school culture. The school climate varies dramatically from one county and one individual school to another. Some schools have created a safe climate without over reliance on law enforcement while other schools have disproportionately high incidents of student referrals into the criminal justice system. This issue is not on the radar of most communities in Virginia and it needs to be addressed by those in the public who see the long term danger and impact of this “school to prison pipeline.”

(July 28, 2014) As a sometimes guest host on the cable show Inside Scoop Virginia, I am given free rein to choose both my guests and the topic of the show. This is the second show I have done in the past year on the subject of women in Virginia politics.

My guest for this show was Stephanie Dix Clifford, a Democratic activist and former candidate for the House of Delegates from Arlington. That’s one of many things we have in common: being former political candidates who were unsuccessful in our first ever campaigns for public office.

There is no shortage of opinions on why we don’t have more women in public office. The fact remains that here in Virginia we have made no substantive gains in women representing us in state and federal offices. There has been only one woman who ever served in a statewide office: Mary Sue Terry who was elected as Attorney General in 1989. Her subsequent run for Governor was unsuccessful. END_OF_DOCUMENT_TOKEN_TO_BE_REPLACED