(Aug. 20, 2018) Catherine Read sits down with inclusion advocate Rachna Sizemore Heizer, about her experience and desire to change the conversation around disabilities to focus on “ability-based inclusion”.   Rachna is an attorney by trade, but after her son Jake’s autism diagnosis she became an advocate for inclusion in the education system. She did this not only for her son, but also for the thousands of other students who share their struggle. As Jake has grown up, and Rachna has gotten more involved in this movement, she now strives to broaden her message and make disability a part of the conversation about diversity in the United States.

Rachna’s main observation when she began this journey with Jake is that there was quite a bit of talk about inclusion, but not much action. She had to fight on a daily basis to have her son looked at as someone with potential. Her main criticism is that the educators he worked with, although well intentioned, worked to make him fit into a mold that he was never going to squeeze into. His limited verbal skills caused his abilities to be overlooked.  Jake is incredibly talented in the musical arena, so much so that he could pick up a guitar and play any song by ear. He also has a sharp memory and can catalogue information easily in his mind.

A more productive approach would be to allow teachers to have the flexibility to nurture these talents, interests and skills in order to help children grow and learn in their own ways. Rachna’s ultimate goal is to have educators focus on creating productive citizens in our society, as opposed to having children with special needs trying to fit in the box that we have created for neurotypical students. Today, one in six Americans are disabled. By looking for opportunities to engage everyone, and play to their strengths, society as a whole will benefit. 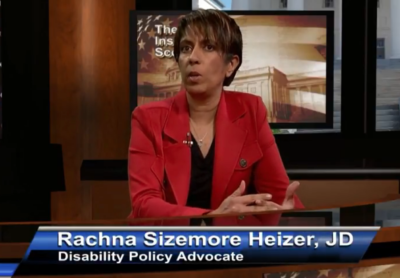 After years of working in the advocacy arena training employers,consulting with educators, and speaking at conferences, Rachna feels that the blind spot in our society is that we do not view individuals with disabilities as a part of the whole. Collectively, we still view a disability as a physical limitation, while completely ignoring those with intellectual, social and emotional challenges. Instead of tying to better understand these conditions, society simply labels the behaviors as “weird” or “odd”. Heizer points out that is one of the main reasons why there is such a high unemployment, and underemployment rate amongst those with disabilities. She strongly believes that if we are able to break down barriers and increase understanding of one another, then we can open up more opportunities where everyone can thrive.

As for underemployment, Rachna has much to say.  She points to the example of the job of grocery bagging, which is a common job appropriated to disabled individuals.  She points out that there is nothing wrong with having people bag groceries, but often times this is the only opportunity afforded to them.  Employers need to understand that many of these individuals are capable of doing much more complex work, and can be real assets to an organization if given the opportunity. 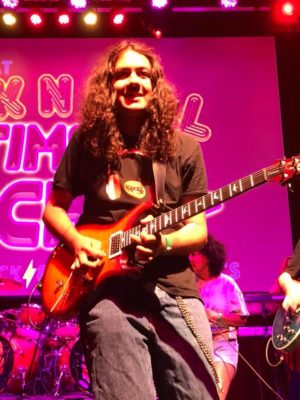 Throughout the interview, Rachna provides poignant examples of instances where she has encountered challenges and obstacles. As Jake matures, she has her eyes on the future and speaks passionately about the work opportunities that may or may not be available to him. She explains that employers focus a great deal on an individual’s personality and social skills when hiring, as opposed to focusing on weather or not the person can actually perform the necessary tasks of the job at hand. Some employers still have employees fill out personality tests, which greatly discriminate against people who struggle with interpersonal skills. They may, however, be the best person for the actual job that needs to get done.

Heizer is working hard to change the mindset of employers through training and advocacy. She encourages employers to understand how their organizations can benefit from diversifying their workforce, and how they can lead the way in making important changes that can take seed throughout our entire society. Her goal is to reach into the business community and open their minds to what a diverse workforce means. Her trainings include encouraging employers to find ways to be more inclusive, to value workers for what they can bring to the table and to adapt the workforce culture to be more welcoming and understanding.

Rachna closes by speaking about Stephen Hawking. She wonders if Hawking would have achieved all that he did if he was born with a disability? Would people have listened to and valued his genius if he always needed so much assistance, or would he have been relegated to lesser things?  Rachna strongly believes we need to value each person for what they CAN do, and is working hard every day to make this a reality.  She serves on the boards of the Fairfax-Falls Church Community Services Board and the Fairfax County Special Education PTA, as well as belonging to the ARC of Northern Virginia, the Autism Society of Northern Virginia, and being an appointed member to the FCPS School Board’s Advisory Committee for Students with Disabilities.  She has also founded the organization Abilities not Disabilities.  Rachna can be found on Twitter @RachnaHeizer.