(Aug 14, 2017) Students return to Fairfax County Public Schools on Monday, August 28, 2017. In advance of this pre-Labor Day start date, host Catherine Read speaks with three members of the 12 person school board and the new Superintendent Dr. Scott Brabrand. Ryan McElveen and Pat Hynes were elected to the FCPS School Board in 2011, Dalia Palchik was elected in 2015, and Dr. Brabrand returned to Fairfax County as the new Superintendent on July 10, 2017.

In the first segment Ryan McElveen, school board member At Large, talks about his path to the school board at the age of 25 after graduate school at Columbia University. He went through the FCPS school system himself, attending George C. Marshall High School and then on to the University of Virginia. He is not an educator by profession. He brought ideas based on what he believes the school system could improve to create a better educational experience for the students. He has also been a staunch advocate for the rights of LGBTQ students and staff, and last month made his views clear on the renaming of JEB Stuart High School. Ryan is committed to transparency in process and has connected with students across the county using social media tools like Facebook and Twitter. The 270K followers of @RyanLMcElveen count on Ryan to be the first point of credible notice of snow closures. 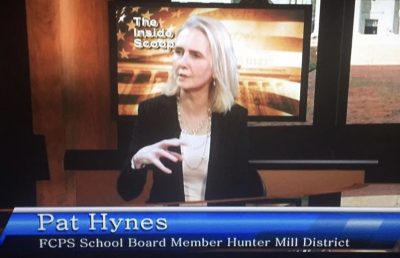 Patricia “Pat” Hynes represents the Hunter Mill magisterial district of Fairfax County where her own two children attended the public schools there. After attending the University of Virginia and Vanderbilt University Law School, she switched careers to become a teacher herself and still teaches in the classroom in Arlington County today. Pat is focused on creating greater equity in our school system. Fairfax County is the 10th largest school district in the United States, and in this county of 1.1 million people, there is a great deal of cultural and economic diversity that impacts student outcomes in the classroom. Finding ways of closing some of the existing achievement and opportunity gaps is a priority for her. She is also focused on investing more in renewable and sustainable energy for our schools and reducing energy consumption and the FCPS carbon footprint.

In the third segment, Dalia Palchik talks about her career switch from global micro-finance to education, where she is the second teacher to serve on the FCPS School Board. Dalia immigrated to the United States from Argentina at the age of 6 and learned English as a second language while attending Fairfax County Public Schools. A graduate of Thomas Jefferson High School for Science and Technology – one of the top ranked high schools in the nation – she went on to study cultural anthropology at Tufts University and to travel extensively. She is a language teacher, and an native Spanish speaker, who is focused on finding ways to serve the diverse student population in the county and their families. Dalia represents the Providence Magisterial District and within that district there many families from different countries who are working to understand their role in their children’s education. She talks about the new public bus program that allows middle school and high school students to get a free bus pass and how that could be expanded to include parents who also face transportation challenges in engaging with their children’s schools. 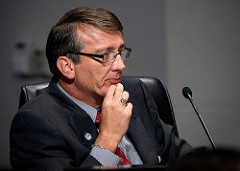 Dr. Scott Brabrand is returning to Fairfax County from his recent position as Superintendent of the Lynchburg (VA) City School System. He switched careers after being a classroom volunteer and discovering that education is really his great passion. He served in many capacities in Fairfax County Schools from a Social Studies teacher at Herndon High School in the mid 1990s, to principal of Fairfax High School from 2005 to 2009, and then on to Cluster Assistant Superintendent. In each role, he has made measurable improvements in student outcomes. He talks about his emphasis on having a growth mindset in education. While acknowledging that testing can’t be entirely eliminated, he is focused on moving education toward critical thinking skills and fostering a greater engagement between students and their educational experience in the classroom.

The early start date of Aug. 28, 2017, has been years in the making as the FCPS School Board has lobbied the Virginia Legislature to grant an exception to the “Kings Dominion Law” that keeps schools from opening until after Labor Day.

This year, on Tuesday, Aug. 29th, there is a special election to fill a FCPS School Board vacancy. Voters will go to their regular polling places – many of those at schools in Fairfax County – while school is in session this time. This is an important election and Fairfax County residents are encouraged to mark their calendars and plan on voting.