(Nov. 20, 2017) Catherine Read talks with Brian Cannon, Executive Director of OneVirginia2021, a non-profit that came together four years ago to address the issue of political gerrymandering in the Commonwealth of Virginia. While “gerrymandering” is named after Massachusetts Governor Elbridge Gerry, the first documented evidence of redrawing lines for political gain was actually done in Virginia. Patrick Henry pushed to redraw lines in the 5th Congressional District that would pit James Madison against James Monroe. This historical fact and many other aspects of political gerrymandering are detailed in the documentary “GerryRIGGED.”

Brian Cannon details the many aspects of gerrymandering and how it has subverted the very idea of representative government. It’s mandated by law that voting districts be redrawn every 10 years based on U.S. Census data. This is to ensure that districts have similar numbers of voters within each one. Those include Congressional Districts, Senate Districts and House Districts. (It also applies at the county and city level as well.) The idea is that each district represents a roughly equal number of voters. The Virginia Constitution also stipulates that these districts must be “compact and contiguous.” The interpretation of “contiguous” might mean a single road, or a connection across water. And “compact” is not specifically defined at all. Over the centuries, and in the last several decades, legislators have taken a creative license – in both parties – to draw lines that protect incumbency.

Both Republicans and Democrats have engaged in incumbency protection. Efforts to promote “non-partisan redistricting” in modern times goes back to a bill introduced by Delegate Ken Plum, the most senior member of the House of Delegates, in 1982 when Democrats controlled the House. Regardless of which party controlled the two chambers of the General Assembly, there has been a resistance to fair redistricting based on the idea of “compactness.”

OneVirginia2021 is challenging this failure to meet the compactness test with a federal lawsuit that involves 11 Virginia Districts: 6 Senate districts and 5 House districts. The short term goal is to seek legal relief for these specific districts – and ultimately those districts that border them – for a possible total of 31 affected districts. The long term goal is to work toward the establishment of a non-partisan commission to redraw these lines every 10 years and NOT legislators. Asking the people directly affected by the outcome of redistricting to set aside their personal considerations in drawing these maps is like asking foxes to guard the hen house.

Other states are already pursuing non-partisan redistricting: California, Ohio & Arizona among them. It’s not a perfect science, but it’s goal worth pursuing. Political gerrymandering is corrupting the concept of a representative democracy. The Wisconsin case of Gill v. Whitford before the United State Supreme Court will be an important Constitutional test of the legitimacy of partisan “cracking” and “packing.” 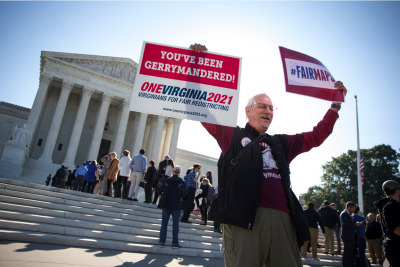 In 2016, the U.S. Supreme Court decided a case that redrew the third and fourth Congressional Districts to “unpack” the African-American voters in the 3rd CD and put some of them in the 4th CD. That resulted in the election of A. Donald McEachin, an African-American Democrat, to Congress in 2016. Although the voters in Virginia were split nearly evenly in their votes in 2012 for Democrats and Republicans, the resulting Virginia Congressional Delegation was 8 Republicans and only 3 Democrats. THAT is gerrymandering. Representatives are selecting their voters – not voters selecting their representatives.

Brian also points out that Virginia has 224 split precincts. There are two precincts in Newport News that are split 3 ways. This has led to a critical issue in the 2017 election in 28th House District where approximately 88 voters may were given the wrong ballots. The mix-up involves voters on two streets in Fredericksburg and may end up in court or with a special election to determine who will win the seat.. The political control of the House of Delegates may well hang in the balance. This particular crisis serves to highlight why we need to have a better system of redistricting PRIOR to the lines being redrawn in 2021.

OneVirginia2021 is using the power of grassroots organizing as part of their effort to activate Virginia voters. They had more than 600 volunteers at the polls across Virginia for the June 2017 primaries asking voters to sign a petition demanding non-partisan redistricting by 2021. Those volunteers were at the polls again on Nov. 7, 2017, for the record voter turnout in the statewide elections asking voters to make their voices heard.