(Dec. 27, 2017) Catherine Read interviews Lori Hass, State Director for the Coalition to Prevent Gun Violence (CPGV), and Julie Keller from the Northern Virginia Chapter of the Brady Campaign to End Gun Violence to talk about gun violence prevention and what we might expect to see with the upcoming Virginia General Assembly legislative session.

In the first segment Catherine speaks with Lori Haas, whose daughter was shot twice and survived the Virginia Tech massacre back in 2007. She has been the acting Virginia State Director of the CPGV, and regularly lobbies both on Capitol Hill and in Richmond to promote responsible gun laws.   Her goal is to promote good offensive bills that will mitigate and reduce gun violence. She took a few minutes to explain how guns bills are dealt with in Richmond. In the House of Delegates, the Speaker of the House has the liberty to assign bills to committees. All of the gun legislation goes straight to the Militia, Police and Public Safety Committee. Specifically it heads to Subcommittee 1, which up until this year was comprised of 4 white men from rural Virginia. These men vote NO on every single bill, meaning that the bill doesn’t even make it out of subcommittee to the full committee for debate, let alone to the House floor for a vote. There are similar challenges getting bills out of committee in the Senate. This is why getting even the modest of gun violence prevention measures has stalled in the state legislature.

Poll after poll has shown that the majority of the public is clamoring for reasonable laws regarding gun control. The most recent Qunnipiac poll shows that universal background checks are favored by over 90% of the public, and most people do not want guns to get into the hands of dangerous people, like criminals, domestic abusers and those who are deemed mentally unfit. Haas indicates that there would likely be in the neighborhood of 120 gun bills this session. She recommends keeping track of the progress of the bills on their website, and reaching out to legislators via phone, social media and email to voice your opinions. Additionally, she welcomes all to Richmond on MLK Day to take part in the Gun Violence Prevention rally on the Capitol Grounds, which is always the largest gathering of citizens during the legislative session. 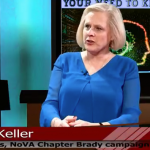 In the second segment, Catherine interviews Julie Keller from the Northern Virginia Chapter of the Brady Campaign to End Gun Violence. She also notes while 90%+ of Americans favor comprehensive background checks and 68% favor a ban on assault weapons, it has been very challenging to combat the strong messaging of the NRA. It has been shown that gun sales increase after a mass shooting occurs, as the old line of “more guns will make you safer” appeals to many Americans. Many believe that the NRA works for the gun manufacturers and produces messaging specifically designed to increase gun sales.

Efforts made by the Gun Violence Prevention groups to mitigate gun deaths has been foiled by the NRA and Republican controlled legislatures on Capitol Hill and in many state legislatures nationwide. SMART gun technology, which requires a fingerprint to unlock the trigger, exits today and could have a great impact and save lives. A ban on bump stocks, a device used by the Las Vegas killer to turn a rifle into an automatic firing machine, did not receive any support in Congress. Barring domestic abusers from obtaining guns could save lives as it’s been shown that women are 5 times more likely to be killed if her partner owns a gun. There are currently 35 states that do not have prohibitions on those convicted of misdemeanor domestic violence from buying or using guns. Virginia is one of those states.

Gun laws vary by state, which can minimize impact across state lines.   Keller uses the example of Virginia, where it’s much easier to buy a gun than in DC, Maryland, New Jersey and New York. Virginia then becomes the “Iron Pipeline” for guns up and down the northeast corridor. These guns are not tracked and there is no waiting period for purchase, so we have no idea where they wind up and in whose hands they reside. Advocates for stronger gun control favor tightening up the background check system, in addition to closing the “gun show” or private sales loophole. This loophole anyone to sell their gun to their neighbor, with no tracking, background check, or questions asked. We have a lot of work to do here in Virginia and nationwide. If you want stronger laws in place you must reach out to your representatives and demand change. 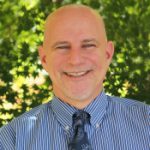 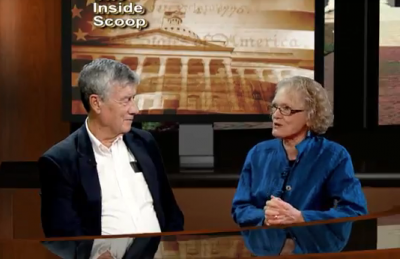