(Dec. 25, 2017) Catherine Read speaks with John Horejsi, Executive Director of Social Action Linking Together (SALT) and Gay Gardner and Kimberly Jenkins Snodgrass of the Interfaith Action for Human Rights (IAHR) to talk about their legislative initiatives for the upcoming year. Catherine inspires her audience to “Go Out and Do Good” during this holiday season by supporting the organizations that work to improve the conditions of those who are marginalized in our society. 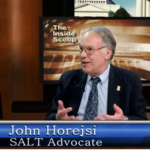 In the first segment, Catherine speaks with John Horejsi to talk about SALT’s history and upcoming legislative issues. SALT was founded in 1983 after faith groups came together to solve problems in Virginia regarding food stamps. It took their coalition 3 years to get their issue addressed and resolved, and in the process learned a lot about how to effectively lobby and bring together lawmakers to solve some of the systemic problems in our society. Their work focuses on the most marginalized citizens, who often have no voice in the area of public policy debate. SALT is a multi-faith effort, bringing together Christian, Jewish and Muslim groups who want to work toward change.

Horejsi shares that SALT will often pick two or three issues to focus on in at any given time. They work hard to fully understand all aspects of any issue, and often compromise and bring people together to find optimal solutions. The organization provides fall and spring trainings to faith groups who want to organize and work in their coalition.

For 2018, SALT is focusing on three main legislative issues. The first issue focuses on prison visitation. With the wide availability of video conferencing, prisons wanted to cut in-person visits. Horejsi notes that in person family visitation has been shown to dramatically cut the recidivism rate. In-person visits help connect prisoners to family in a much more effective way, so SALT is advocating for the Department of Corrections to not cut the in person visitation, even if they increase the availability of video conferencing.

The second issue that they are working on is the elimination of Lunch Shaming. This is the practice where schools send home notes with children, often in bright colored paper pinned to their jackets or backpacks, indicating that the child owes money for lunches. This creates a stigma and shames the child. SALT aims to end this practice and require that the school deal directly with the parents on these types of issues, instead of putting the children in the middle of solving the collection problem.

The final issue that will be addressed this year is a Scholarship Pilot Program, where welfare funds from the TANF (Temporary Assistance for Needy Families) would be allocated to scholarships for college or technical schools, for students whose families qualify. This gives students from poor families, who otherwise might not have the opportunity to seek higher education, an incentive to do well in high school so they could earn a scholarship. This is a way to help lift students up and hopefully break the cycle of poverty in their family. 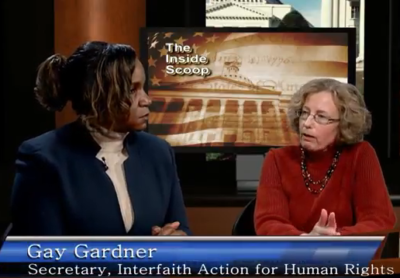 In the second half of the show, Catherine speaks with Gay Gardner and Kimberly Jenkins-Snodgrass of the Interfaith Action for Human Rights. Their organization focuses on ending prolonged isolation (solitary confinement) in our prison system. They consider solitary confinement and prolonged isolation as torture, as the practice is often over-used or misused in the prison setting. The practice can be emotionally crippling, and can make re-entry to society that much harder. Through their work they found that many inmates wind up with prison sentences that are much more harsh than what they were assigned in the court system. When inmates are assigned to solitary confinement or moved to different facilities, it can often lengthen their prison sentence, but it is not always very clear why these punishments are given.

The commonwealth of Virginia ranks 13th in the country for use of solitary confinement, so Gardner and Jenkins-Snodgrass would like to see the practice used less frequently. They have also found that the system is not very transparent, so if an advocate is looking for information about a certain case it is often very hard to understand what is happening and why these punishments are being issued.  They are working hard to improve this process. IAHR has formed a coalition with SALT, ACLU (American Civil Liberties Union of Virginia), Virginia Council of Churches, Virginia Cure and NAMI (National Association of Mental Illness – VA Chapter) to address these issues.

As their coalition continues to assess the landscape with the new makeup in the House of Delegates, they plan on identifying partners who can work together with them to push forward more progressive policies in relation to use of prolonged isolation in the prison system. Their goals also include improving transparency and helping inmates successfully re-enter society after paying their dues for the crimes that they committed.