(Oct. 1, 2018) Catherine Read interviews Tarina Keene, Executive Director of NARAL (National Association for the Repeal of Abortion Laws) Pro-Choice Virginia. Tarina has been with NARAL for 10 years, and has overseen tremendous growth of the organization during her tenure. Her work focuses on protecting the rights of women to make their own healthcare decisions through policy, training and education, in addition to electing politicians who are committed to protecting this right.

Over time, Keene notes that although Roe v Wade has not been repealed, some states have worked hard to chip away at a woman’s right to choose. This makes it harder for women to exercise their right to be in control of their own bodies. With the rise of the Tea Party starting in 2010, there was a wave of conservative politicians swept into office on the promise of rolling back abortion rights.

Some states, like West Virginia, have only one clinic in the entire state. This makes it economically unfeasible for poor women to incur the expense to travel to the clinic and possibly need overnight accommodations. Other states have put restrictions such as minors being required to have parental approval, or a 24-hour waiting period for the procedure. These laws are all designed to be harmful and burdensome for women, which can ultimately put women at risk. Abortion is proven to be one of the safest medical procedures on the books, yet there are those in power who choose to put women in harms way by not allowing safe access. 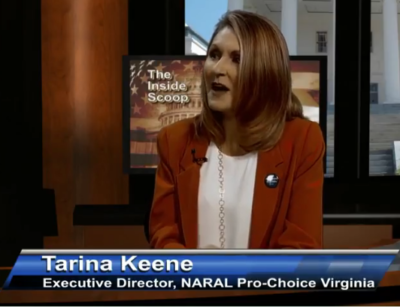 Research conducted over the past four years shows that six in ten women who are getting an abortion already have a child at home. This disproves the myth that the majority of women who are having this procedure are teenage girls. In any case, for whatever reason, all women should have legal access to a safe abortion if that is what they decide is right for them. Keene also believes strongly in all women having access to family planning and affordable birth control, because that reduces women having to be in the position of making this difficult decision.

Here in Virginia, we have seen progress on these issues over the past several years. In 2010, under Republican leadership in the legislature and the executive branch, some of the most restrictive laws were passed in regards to women’s health. The Virginia Senate passed the very controversial mandatory trans-vaginal ultrasound bill, requiring all women who wanted access to an abortion to undergo an invasive procedure and have a mandatory 24 hour waiting period.  Additionally, in 2011, we saw the TRAP regulations put in place (Targeted Regulation of Abortion Providers). These required all abortion facilities to be treated as hospitals, and forced closure of many clinics, reducing access to many women throughout the state.

Since then, these laws have been repealed under the leadership of former Governor Terry McAuliffe and now Governor Ralph Northam.   Keene continues to work hard to elect more pro-choice candidates. Today, there are 49 pro-choice legislators in the House of Delegates and 19 pro-choice State Senators. She is looking to 2019 with hopes of turning the legislatures to a solidly pro-choice majority.

When that happens, Keene’s next goal is to enact a constitutional amendment in Virginia that enshrines a woman’s right to choose. If the state elects a pro-choice majority in 2019, then a constitutional amendment can be introduced in 2021 (the year of a Governor’s race in Virginia), which would allow the measure to be brought to the ballot box in 2022. It is a lofty goal, but one that Keene is ready and anxious to take on. 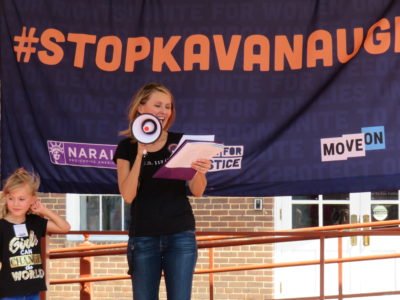 Keene is very nervous about what the Supreme Court will decide regarding Roe v Wade in the upcoming months and years. With the retirement of Justice Anthony Kennedy, coupled with campaign promises by President Trump to overturn Roe v Wade and put laws in place that punish women and criminalize abortion, NARAL is gearing up for a fight to preserve a woman’s right to choose. Keene admits that much work will need to be done on the state level, as the shocking prospect of Roe v Wade being gutted is now on the table. There are many cases working their way up through the court system as we speak.   With Kavanaugh being sworn in this week, we now have an Associate Justice who has referred to Roe v Wade as “rotten precedent”.

Keene invites all who are willing to stand with her to speak up and protect a woman’s right to choose. She is excited about the prospect of more women representing Virginia in Congress. She hopes that all men will stand with her, especially in today’s climate, to denounce the patriarchal aspects of our society and bravely support women who want to have autonomy over their bodies. NARAL Pro-Choice Virginia will be holding a “Men for Choice” event at Port City Brewery in Alexandria on October 17th. Check out the website for details, and make the choice to come together and support women’s reproductive rights here in the commonwealth.