(May 28, 2018) In a special edition of Inside Scoop, Catherine Read is joined by 56 members of the Vienna Jammers Red and Black Ensembles. These students are in grades 2 through 5 and represent over 20 different schools in the Northern Virginia area. Their performance is led in studio by founder and director, David L. Reynolds, Jr., who was previously a guest on Your Need to Know in April. 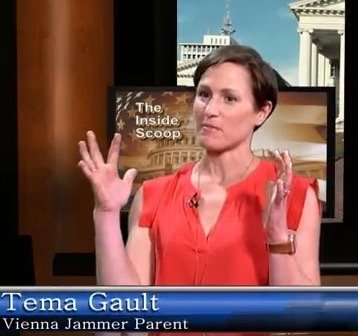 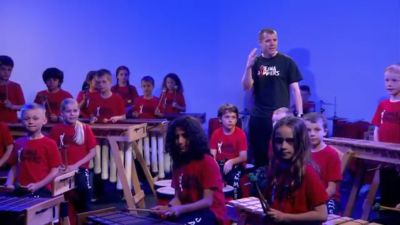 Parent Keith Tylecki praises the leadership of director Dave Reynolds and talks about how this experience focuses on working together as a group in an environment that is not driven by competition. His son Andrew joined the Summer Experience Camp between first and second grades and now plays with the Red Ensemble. Another parent, Jessica Plowgian, talks about how excited her daughter Lily was to see the Vienna Jammers in the Halloween Parade as well, and she too signed up for the summer camp between first and second grade. Lily has been fortunate to have director Dave Reynolds as her music teacher at Vienna Elementary School. The program initially started at Vienna Elementary and now includes students from schools as far away as Gainesville.

Lesley Laing, the mother of Greta who plays in the Black Ensemble, makes the drive from Gainesville twice a week for practices. Her daughter, an avid percussionist at an early age, wanted a camp program to build her skills over the summer. Lesley found that the majority of the programs in the area were intended for high school band students – except for the Vienna Jammer’s Experience Camp. Greta so enjoyed the camp program that she decided to stay on with the ensemble during the school year as well. Lesley echoed the sentiments of the other parents as to the value of the instruction, the benefit of being in an ensemble that is committed to excellence in their performances, and how much they value the leadership and direction of founder David L. Reynolds, Jr. 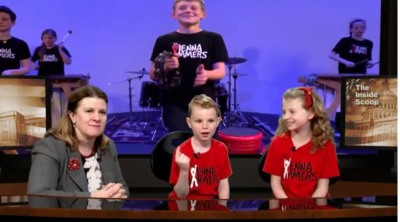 Two second graders in the Red Ensemble, Jayden and Piper, are all enthusiasm about their participation in the Vienna Jammers. They discuss their experience in the Summer Experience Camp, their favorite songs and which instruments they enjoy playing the most. They are looking forward to playing at the annual Viva Vienna Festival over Memorial Day weekend in Vienna, VA. Each plans to continue on with the Vienna Jammers in anticipation of one day playing with the Black Ensemble once they are in the fifth grade.

Founded in 2006, The Vienna Jammers mission is “To educate youth through percussion programs; provide a dynamic and diverse experience in the performing arts; nurture the creativity of each child, and enrich lives within the community.”