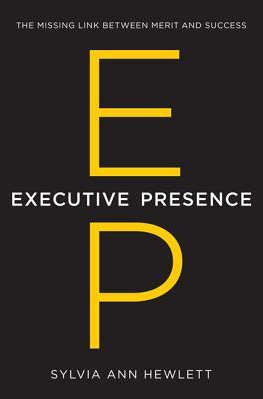 This book is excellent. Not so much that it’s groundbreaking material, but the research and personal stories validate what most of us already know about what it takes to be perceived as a “leader.” To get the most out of it, you need to be in the frame of mind that values “what it is” over “how it should be.” While the book is not gender specific, author Sylvia Ann Hewlett’s research points to the greatest challenges for potential leaders and those challenges happen to fall heavily upon women and minorities. There is little doubt that women face substantial challenges in navigating their way to the top in a culture where male leaders predominate and always have. If you are serious about developing your Executive Presence (EP) this book will be invaluable.

A wide and varied range of subjects is addressed, including the tension between conformity and authenticity. While that is an individual struggle we all confront at some point, the hurdle is a bit higher for women and minorities. “For these historically underrepresented groups are dealing with a double whammy. Not only do they need to shape and mold their identities to fit an organizational culture (something everyone faces), but they’re required to ‘pass’ as straight white men. Why? Because this continues to be the dominant leadership model. Eighty-eight percent of those who sit in corner offices on Wall Street and Main Street look this way.” I would add to that – 65% of everyone elected to office as well.

Emotional Intelligence (EQ as coined by Daniel Goleman) is an essential element to developing EP. “EQ is just as important for building trust because demonstrating it shows you have not only self-awareness but also situational awareness.” Being able to “read a room” is something I developed through theater experience. A good stage performance requires being able to read the audience and to work off their energy. It’s a skill that is needed in every situation whether it’s a roomful of people or just one person.

In the section titled “A Narrow Band of Acceptability” she references Carolyn Buck Lane’s “Goldilocks syndrome” as it applies to women. “You’re never ‘just right,'” she explains. “You’re too this, you’re too that — and you always will be, because what’s behind it is hidden bias. If you don’t fit the stereotype of a leader, you’re not likely to be seen as becoming one.” I often speak of the centuries of institutional bias that affects how we see leaders. Many times it is dismissed out of hand by both men and women who believe that “individual merit” will simply lift the best candidates to the top of the ladder. Gender is magically eliminated as a factor in the face of “most qualified,” despite the fact that we continue to have leaders that are predominantly white and male.

Culture and history are enormous factors that affect our perception – and our perception is in fact our reality. “Compounding this stereotypical perception of women is men’s inability to perceive their own ‘invisible knapsack’ of privilege, that kit of inborn traits that grants them access, acceptance, and authority they don’t even realize they have and are carrying.” There are limits to being self aware and I think this example makes that point.

Without dwelling on it incessantly, the issue of double standards pops up throughout the book. It’s the reality of the situation. Observations such as “Behaviors that confer gravitas on a man by demonstrating he can ‘show teeth” . . . come off as aggression in a woman.” And she provides well known examples of that. “Our survey results capture it perfectly: 31 percent of our respondents said that being ‘too bossy’ undermines a woman’s EP, and 31 percent said being ‘too passive’ undermines a woman’s EP. Go figure.”

Much of the research has been conducted by Hewlett’s organization, the Center for Talent Innovation (CTI). Toward the end of the book she makes a strong case for the benefit of diversity in any organization. “Innate diversity on teams — having members who are female, nonwhite, or of non-European origin — boosts the team’s innovation potential by providing critical insight into the needs and wants of overlooked or underserved end users.” I think this certainly applies equally to elected representatives and their constituents.

One of the people interviewed extensively for the book is Kent A. Gardiner, chair of the law firm Crowell & Moring LLP. He and his firm are committed at the highest levels to cultivating women and minorities to take top positions in their firm. I applaud his public stance on that issue and his organization’s commitment to be intentional through actions rather than just having “good intentions.”

I highly recommend this book