(August 28, 2019) Catherine Read interviews Delegate Kathleen Murphy (D-34) about her reelection campaign for the Virginia House of Delegates. Murphy was elected to the House in a special election in 2015, succeeding Barbara Comstock. The 34th District encompasses McLean, Great Falls, parts of Vienna and stretches into northern Loudoun County.

All 140 seats in the Virginia General Assembly are up for grabs this year.  This includes the Board of Supervisors, School Board, Commonwealth’s Attorney, Sheriff and the Soil and Water Conservation Board. As Murphy hits the doors to talk to voters, one of the top concerns that she continues to hear about in her district are concerns about traffic. Congested roadways has a major impact on quality of life, and voters want to know that she is engaged in looking at creative ways to solve these problems.

Delegate Murphy sits on several committees in Richmond, including Transportation, General Laws, and Cities, Counties and Towns. She is always looking out for her constituents, and works hard to ensure that their needs are best represented in Richmond.

Growing up as a military brat, Murphy understands the importance of taking care of our veterans. She is a member of the Military and Veterans Caucus, and specifically chairs the women’s working group for the Board of Veteran Services. Virginia has one of the largest veteran populations, and Murphy works day in and day out to serve the approximately 104,000 female veterans in the Commonwealth. Many times these women are overlooked, and do not know how to access services. Her working group is designed to change that paradigm.

Gun violence prevention is another issue that Murphy has championed during her time in elected office. Her brother was brutally murdered during a botched robbery attempt, so she is intimately aware of the pain and suffering of those who are affected by gun violence. Last year she chaired the Safe Virginia Initiative, to look at how laws could change to reduce the instances of gun violence. 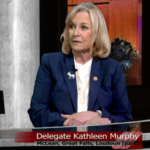 Unfortunately, with the GOP in control of the legislative agenda, she does not believe there is much of a chance that anything will change. After over 20 years in control, there has only been a loosening of gun laws. Even though the majority of Virginians support universal background checks, closing the gun show loophole, and red flag laws, there has been no movement on the issue.

After the horrific mass shooting in Virginia Beach, when the Governor called a special session to address gun violence legislation, the GOP dismissed the session after a mere 90 minutes. Murphy points out that we will never have any meaningful change until there is a change with who is in control of the statehouse.