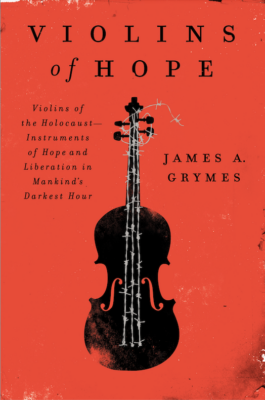 (July 2021) Dr. James A. Grymes, a professor of Music History at the University of North Carolina in Charlotte, has brought forth such a well researched and well told story of violins that survived the Holocaust, even when many of their owners did not. It is fascinating and horrifying, an emotional retelling of what happened to violinists – famous and not – during a period in history where Jews were savagely exterminated all over Europe. In some instances, these violins saved their owner’s life and that of their families.

I read this book in preparation for interviewing Dr. Grymes for a show I host called Inside Scoop. The upcoming collaborative exhibition called Violins of Hope is taking place in Richmond, Virginia, from August 4th to October 24th. The violins in this exhibit were played by Jewish musicians in camps and ghettos during the Holocaust and ended up in the hands of Amnon Weinstein of Tel Aviv, a second generation craftsman who repairs violins. The stories of the instruments, their owners and how they came to be in Amnon Weinstein’s shop makes for riveting reading.

There is so much I was not aware of regarding the role that music played during the Holocaust. There were camp orchestras at many concentration camps, such as Auschwitz, where work details left in the morning to the music of the orchestra and returned in the evening greeted by the same music. Providing music for soldiers spared the lives of some musicians who were given extra food or lighter work assignments. Dr. Grymes has focused his book on telling detailed stories of musicians from Germany to Romania, the Ukraine to Norway. There is a great deal of significant history woven into the telling of these very personal accounts. I learned so much.

Bronislaw Huberman, Ernst Glaser and his wife Kari, the boy partisan Motele Schlein, Feivel Wininger and his baby daughter Helen. Their lives mattered and Dr. Grymes has sought out their stories as a way of preserving their memories the way their musical instruments have been lovingly preserved.

Amnon Weinstein lost over 400 members of his family. His parents refused to speak about the loss of their parents, siblings and extended family during the Holocaust. Yet Amnon, who learned violin repair from his father Moshe [who was taught by violin maker Yaakov Zimmerman] finds hope in restoring and sharing these violins. He observed that while Nazis did not survive beyond WWII, these violins have. “These instruments are a testimony from another world.”

Although Nazis did not survive beyond the defeat of Germany, fascism lives on all over the world and is on the rise. For the 15th consecutive year, there has been a decline in global freedom. Teaching history – fully and truthfully – is important in helping each new generation understand we are not immune to the basest, darkest and cruelest instincts of human beings. Evil is never truly eliminated, it is kept at bay, and only the greatest vigilance prevents another Holocaust in a different iteration from happening again.

I highly recommend reading this book and then making plans to visit the Violins of Hope in Richmond Aug. 4th thru Oct. 24th at the Virginia Holocaust Museum, The Virginia Museum of History & Culture and the Black History Museum & Cultural Center of Virginia. There will also be a series of concerts in collaboration with the Richmond Symphony Orchestra where these violins will again bring comfort and joy to those fortunate enough to hear them. More information can be found at www.ViolinsofHopeRVA.com