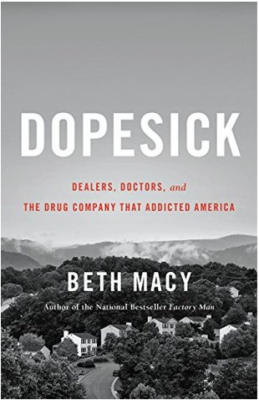 (March 2019) Beth Macy again brings her keen skills in research and journalism to tell another story about Virginia. A long time journalist with The Roanoke Times, she brings to life the stories of Virginia few people have heard before – as she did with her two previous books Factory Man and Truevine.

In Dopesick she pulls back the curtain on the genesis of the opioid epidemic that continues to ravage Virginia and the rest of the nation. No longer confined to rural Appalachia where it all began, it has now spread to the white suburban and affluent communities throughout the Commonwealth.

Those who were earliest to sound the alarm about the addictive threats of Purdue Pharmaceutical’s new drug Oxycontin were ignored. Despite the fact that John Brownlee, US Attorney for the Western District of Virginia, successfully prosecuted Perdue Pharmaceutical for “criminal misbranding” in 2006, that did not sound alarm bells for public health officials or law enforcement. The first successful case against the pharmaceutical company (owned by the billionaire Sackler family) resulted in an award of $634.5 million dollars but failed to signal what was happening in the larger context.

Beth Macy details how the drug epidemic followed I-81 north through the Shenandoah Valley. Drugs were being brought into small towns along the route and down into Roanoke from Baltimore on a daily basis by a network of distributors and users.

She also covers the detrimental effect of the fight for Medicaid Expansion in Virginia and how four years of Republicans putting up road blocks starved a growing number of addicts of the resources they needed for recovery and rehabilitation. She calls out the role Democratic Senator Phil Puckett’s resignation in 2014 played in handing the Republicans in the legislature the majority they needed to block Medicaid Expansion. Puckett represented five rural counties in southwest Virginia where the opioid epidemic was raging unabated.

There is a tremendous stigma around this epidemic because it has struck hard at suburban middle class and affluent white families, as well as poor and rural white families. Drug addiction has turned the corner from simply being deemed criminal activity to being addressed as a disease. It has been a disease all along, but now that respectable people are falling prey to addiction and death from drugs, there is a greater urgency in finding ways to prevent and rehabilitate.

The most compelling parts of this book are the stories of the individuals that Beth Macy got to know in the years she spent researching this book. So many lives wasted so tragically.

I highly recommend this book to everyone. If your life hasn’t been touched in some way by the opioid epidemic raging through Virginia, it is likely just a matter of time before it is. We all need to get involved in advocating for better resources and programs to meet this crisis that exists in every community in Virginia.