(July 17, 2019) Catherine Read interviews Kimberly Boateng, the new student representative to the FCPS School Board for the 2019-2020 school year. Kimberly is an incoming junior at Robert E. Lee High School, and was elected this past spring by the Student Advisory Council (SAC).  She serve a one-year term starting in July, and will participate in School Board meetings as a non-voting member.  Kimberly is the 49th student representative to serve in this capacity.

Over the course of her academic career, Kimberly has attended seven different schools, six of them being within the FCPS system.  Through this unique lens, Kimberly has gained a good snapshot of the county and has a lot of ideas based on her experiences. She understands the diversity, both from a racial and socioeconomic standpoint, and is able to use that understanding to help advance the issues that are most important to her.

Among the pressing issues at hand, Boateng believes that mental health, implicit bias awareness, the dress code, assistance for at-risk students, drug use, and punishment reform are most important.

Some of these issues dovetail with one another. Punishment reform merges in with the issue of implicit bias and at-risk students. She points out that the policy of suspending or expelling students is not working. If the goal is to reform the students and help them, then keeping them in school and making them aware of their mistakes, as well as teaching them how to avoid making the same mistakes in the future is the most important thing. 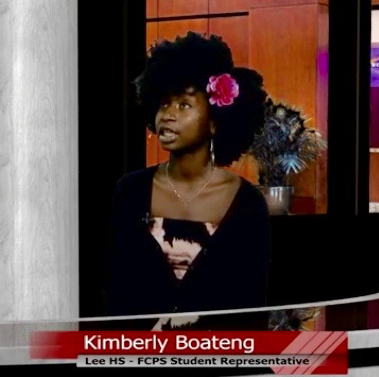 “The worst thing that a school can do” she says, “is give up on a child”.

Since she has been in so many different schools, Boateng has had the opportunity to see things that have worked well, and things that have not worked out the way that they were intended. She would like to highlight the creative, out of the box ideas that she has seen to be successful.

Boateng takes her role seriously, and hopes that the FCPS student body will reach out to her with their thoughts, ideas and observations. The school system is very large, and she believes the only way to be an effective representative is to be open and responsive to the student body that she represents. Her email is effective on July 1st, and she hopes to start hearing from them with ideas and feedback for the new school year.