(July 31, 2019) Catherine Read sits down with Del. Marcus Simon (D-53) to talk about how citizens can get involved in affecting policy change at the state and local level of governments.

Simon was introduced to state politics in his first job out of college, as an aid with his predecessor, Del. Jim Scott. Without much knowledge about the inner workings of state government, he got a quick lesson on both how things work, and how quickly things can move in Richmond. While he embraces the concept of citizen legislators, it also means that there is a very short time frame to get things done during their abbreviated legislative session each winter.

One of the aspects of state government that really appeals to Del. Simon is the fact that legislators are very accessible to their constituents.   Representatives are able to hear directly from them about their ideas and concerns.  There are not a lot of “layers” in state government, meaning there are very few staff people who serve as buffers.  When you want to speak to your representative, it is easy to do so. He has personally enjoyed getting to know his constituents, learning about new issues, and advocating on their behalf.

He encourages everyone to participate in the legislative process. One way people can engage is to step forward and take a leadership role in a professional association. When it comes to professional licensing and regulations, the state plays a big role. This is a great way to get involved if they have suggestions for improving things within their industry.

He also recommends scheduling a time to meet with him here in Falls Church, or coming to his office in Richmond during session. He always has time for constituents, and wants to hear about issues that are important to them. Legislators also often attend community meetings such as civic associations, neighborhood community groups or local advocacy groups. If you are interested in having him, or any of his colleagues, speak at a local meeting, simply contact their office to arrange the details. You can find your local representatives at this website, simply plug in your address. 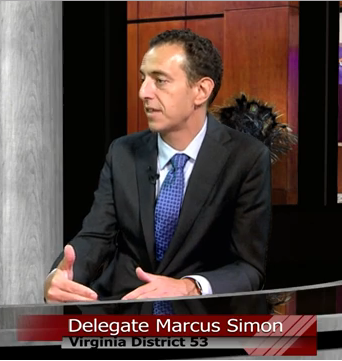 In addition to stepping forward and getting involved, Simon has some advice for younger constituents who are interested in civics. The Virginia General Assembly has a page program geared towards students age 13-14. Teens can apply starting August 1st for these coveted spots. The students who are selected will move to Richmond during the legislative session.  They work in the House and Senate chambers, while also doing schoolwork under the supervision of tutors.

It is a wonderful hands-on learning experience. Del. Simon is always impressed with the young people who come to Richmond, and very much enjoys having them as part of the legislative session. He is continuously impressed at their mock legislative session that they run at the end of each season. It shows just how much they absorb by being present and working in the chamber every day.

Simon encourages all citizens to take action in our democracy. There are elections this fall for every seat in both the House and the Senate, and a lot of work to be done. As a member of the minority party since his election in 2013, Simon is looking toward a future when the Democrats can take back the majority. He knows that if they are able to accomplish this, then there will be real policy change on big issues like gun violence prevention, protecting Medicaid expansion, and criminal justice reform.

As a citizen, if you have an idea for legislation, he encourages you to reach out to your representatives today. They are working on crafting agendas and bills, and need time to gain an understanding of the issue, as well as come up with the most effective wording for the bill itself. Come fall, they will be filing bills with the legislative services office, and want to ensure that they have plenty of time to ensure that the bill is written with the most effective language.