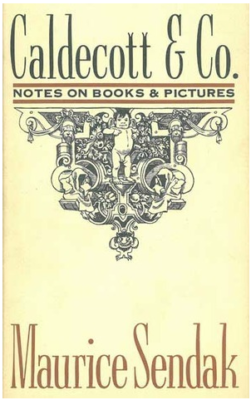 (July 2019) I love this book so much! I was led to it from a footnote in Dear Genius: The Letters of Ursula Nordsrom which was published in 1998. Maurice Sendak dedicated Caldecott & Co: Notes on Books & Pictures to his beloved editor Ursula Nordstrom, who died in 1988, the year this book was published.

By 1971, Sendak had illustrated 70 books in twenty years. Most of his illustrations in the 1950s were for the works of other authors. In 1964, he wrote and illustrated Where the Wild Things Are which won the Caldecott Medal that year. His acceptance speech for that award, the Hans Christian Andersen Award, and the Laura Ingalls Wilder Award make up the last part of this book of essays.

Where the Wild Things Are was not universally embraced by librarians and the adult buyers of children’s books, and In the Night Kitchen even less so. In one of Sendak’s essays published in 1964, he quotes Nordstrom about the difficulties in publishing quality children’s books:

It is always the adults we have to contend with — most children under the age of ten will react creatively to the best work of a truly creative person. But too often adults sift their reactions to creative picture books through their own adult experiences. And as an editor who stands between the creative artist and the creative child I am constantly terrified that I will react as a dull adult. But at least I must try to remember it every minute!

In a separate essay from 1964 he talks about Nordstrom’s support for Where the Wild Things Are despite her “squeamishness” on seeing the first pictures for the book.

This admission of misgivings and her realization that she was reacting in a stereotyped adult fashion was a confession of utmost truth, and only she could have made it. This is how she put it recently: “And so we remembered once again, as so many times in the past, that the children are new and we are not.” Her support and unflagging enthusiasm helped bring the book to a happy conclusion.

These essays written by Sendak are from 1955 to 1987 and are not in chronological order, but rather arranged topically about the history of children’s books and the artists who illustrated them.

One of the essays is the preface to Pictures by Sendak published in 1971. It’s a selection of 19 illustrations from eight of the 70 books he illustrated – all of them after the 1950s. I went searching for the portfolio at my “go to” website for out-of-print books www.abebooks.com and they do indeed have sellers in their network who have the portfolio for sale from a low of $750 to a high of $16,000. I’m guessing it was a small print production.

One fact that emerged in these essays is his love for music and he refers to some of his drawings as “a kind of pen-and-ink ballet.” He drew his illustrations to classical music and had a fondness for Mozart. In addition to picture books, he also designed sets for operas and ballets, including The Magic Flute. The Morgan Library in New York City has a special exhibit of his theatrical designs from June to October 2019, Drawing the Curtain: Maurice Sendak’s Designs for Opera and Ballet, which I’m hoping to see this month.

Woven throughout the essays are stories of his childhood growing up in Brooklyn in the 1930s- the impact of Mickey Mouse, comics and the movies. From his acceptance speech for the Hans Christian Andersen Award in 1970:

Mine was a childhood colored with memories of village life in Poland, never actually experienced but passed on to me as persuasive reality by my immigrant parents. On the one hand, I lived snugly in their Old Country world, a world far from urban society, where the laws and customs of a small Jewish village were scrupulously and lovingly obeyed. And on the other hand, I was bombarded with the intoxicating gush of America in that convulsed decade, the thirties. Two emblems represent that era for me: a photograph of my severe, bearded grandfather (I never actually saw him), which haunts me to this day and which, as a child, I believed to be the exact image of God; and Mickey Mouse. These two lived side by side in a bizarre togetherness that I accepted as natural. For me, childhood was shtetl life transplanted, Brooklyn colored by Old World reverberations and Walt Disney and the occasional trip to the incredibly windowed “uptown” that was New York – America. All in all, what with loving parents and sister and brother, it was a satisfying childhood. Was it American? Everybody’s America is different.

One of many interesting things about Ursula Nordstrom and Maurice Sendak is their choice of life partner. In her letters to writers over the decades, Nordstrom refers to her partner Mary Griffith – their homes, their travels, their parties. In 1988 Nordstrom predeceased Mary Griffith, who is credited in Dear Genius with providing some of the letters that appear there.

Maurice Sendak’s longtime partner, Eugene Glynn, predeceased him in 2007 and in Glynn’s obituary Sendak was mentioned as his partner of 50 years. The following year, in an interview with the New York Times, he said never told his parents. “All I wanted was to be straight so my parents could be happy. They never, never, never knew.”

I’m struck by how two such talented people impacted children’s literature, had wonderfully rewarding lives and loving partners, and were part of an LGBTQ community that wasn’t itself “out” in the workplace from the 1930s through the 1980s in New York City. When we talk about the need to teach LGBTQ History, we need to teach about the amazing accomplishments of people like Ursula Nordstrom and Maurice Sendak who persevered and gave so much to this country and to our culture. There are a number of well known authors long deceased who were less well known members of the LGBTQ community. Let’s put these role models out there for students.

I’ve enjoyed the time I’ve spent with both Dear Genius and Caldecott & Co. and I’m awestruck by seeing how some of my favorite childhood books were made. I would highly recommend these books to anyone of any age who loves books. 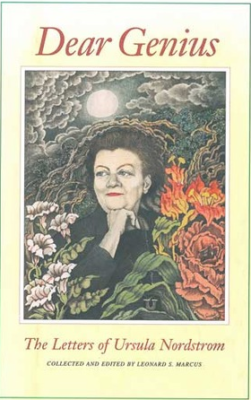