(Aug. 22, 2018) Catherine Read sits down with Lily Liu, Historian Emerita at the AARP, to discuss the life and legacy of Ethel Percy Andrus, Ph.D. (1884-1967), founder of the organization. (Until 1999, it was known as the American Association of Retired Persons.) As AARP marks its 60th anniversary in 2018, Liu shares important information about the history of the organization and the inspiration she finds in its founder.

Born in 1884, Ethel Percy Andrus was a schoolteacher and made an enormous impact, one student at a time. Upon retirement, she offered her volunteer services as a welfare coordinator in her home state of California. She was shocked when she met so many seniors who were living in poverty, asserting that nobody who works their whole life should have to suffer in this way. A turning point was when she met a retired schoolteacher who was living in a chicken coop because they could not afford their own home. This drove her to found the National Retired Teachers Association (NRTA). She worked collectively with the state associations to bring them together to form a Federation that successfully advocated for better pay, retirement and health benefits. 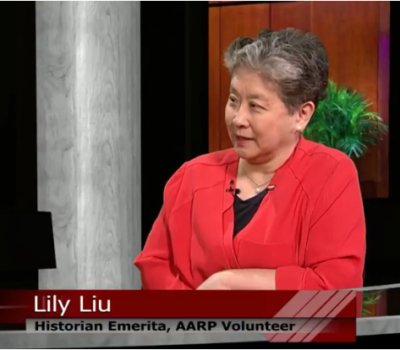 Many seniors, who were not schoolteachers, reached out to Andrus during that time and asked if they too could join her federation. Unfortunately, they could not because they were not teachers. It did give her the idea to create a broader organization catering to seniors, which led to the birth of the American Association of Retired Persons organization in 1958. 38 million members strong, AARP is a nonpartisan nonprofit dedicated to representing the interests of seniors nationwide. Each state has its own office to support their residents, and Virginia’s AARP headquarters is located in Richmond. A wealth of resources can be found on their website, including premier events, travel opportunities and volunteer jobs that need to be done in the community.

The three pillars of the AARP organization are independence, dignity and purpose. Jim Dowd, Executive Director of the Virginia AARP, works tirelessly day in and day out to advocate on Capitol Hill in Washington, as well as in the halls of the Capitol in Richmond, to ensure that the needs of seniors are well represented when legislation affecting them is being crafted. AARP advocates on issues such as healthcare for seniors, sustaining livable communities, aging in place and everything in between.

Lui reminds us about the importance of having Ethel Percy Andrus as a role model. Andrus began her journey to help seniors upon retirement from a long and successful teaching career. She gave equally as much to the world in her role as an advocate and champion for seniors, as she did to the children she taught in school. She had a vibrant, rewarding and fulfilling life in her “encore years” and serves as an inspiration for all of how to carve out meaning in the chapter of life that begins after retirement.

(Mar. 28, 2018) Catherine Read speaks with Suba Saty, facilitator for the AARP Speakers Bureau in Northern Virginia. The Speaker’s Bureau is a wonderful benefit for AARP members, as the discussion topics are wide and varied, and provide a rich resource of information. Saty is in charge of finding speakers and matching them with organizations and programs in the community.

Presentation topics include everything from understanding Social Security and Medicare, to the 5 Pillars of Brain Health, to Protecting Yourself from Identity Theft. The AARP website offers a full listing of upcoming talks, along with locations and registration information. AARP has recently forged a partnership with the Osher Lifelong Learning Center (OLLI), which is a part of George Mason University. Other speaking engagements take place at community centers throughout Northern Virginia, as well as in churches, synagogues and mosques. Anyone can request a speaker, but Saty notes that due to high demand they normally schedule engagements about 3-4 months out in the future. Speakers are also available to participate on panels for local conferences. 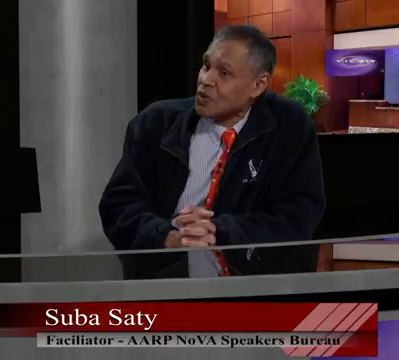 The Bureau is always looking for qualified volunteer speakers. If you have a specific expertise and are interested in getting involved, you can apply online to be vetted through the state office of AARP in Richmond. Once the application process is complete, the local Fairfax Bureau can be in touch to talk about how you can lend your specialized knowledge to local members.

In addition to the speaker series, AARP also has other local programming available to members. The driver safety course is given throughout the year, and can result in a small discount on car insurance premiums. AARP also offers year-round Tax Aid advice free of charge, and a Voter Engagement Program.

Several times throughout the year AARP will sponsor academies at local community centers, where there will be an entire day of programming featuring multiple topics. In June there will be a mini-academy at Walter Reed Community Center in Arlington and on September 8th the OLLI institute will host an all day seminar. Please visit the website for more details and registration information.  You can also signup to get newsletters and email updates.  You can also find AARP Virginia on Facebook and Twitter (@AARPVa)