(May 18, 2013) The Washington Literacy Center (WLC) founded in 1963 is one of the oldest adult literacy programs in the District. Executive Director Terry Algire leads a dedicated team of staff, instructors and volunteers committed to helping some of the 90,000 functionally illiterate adults living in the city find their way to reading. The inability to read directly impacts employment. In DC’s Ward 8 alone, it’s estimated that one in five adults is unemployed.

WLC is located in the historic Thurgood Marshall Center on 12th Street NW, two blocks from the U Street Metro Station. This video shows a special “Evening of Literacy” program put together by students and instructors to show how the Wilson Curriculum works to aid adults learning to read. Members of the board of directors, WLC supporters, donors and the public heard testimonials from students whose lives have been impacted by this program. Then groups toured stations where they could experience first hand some of the instructional modules. Adult literacy is profoundly important to the economic health and well being of our communities. Consider donating money or your time to this effort. WLC can be reached by email at [email protected] 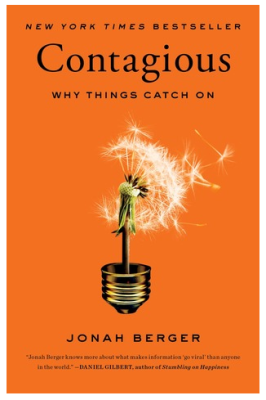 (May 6, 2013) I loved this book by Jonah Berger. I could tell before he even said it, that this was influenced by the Heath Brothers book “Made to Stick.” Chip Heath was his advisor when he was at Stanford. That influence proved invaluable in how he presented his theories on what makes something contagious.

In this particular era, we equate “contagious” with “viral video.” In fact, “going viral” has entered our lexicon as a goal to be achieved in the arena of digital marketing. Berger pinpoints some of the common characteristics that appeal to people and make them want to share something with others in their network: things that make us laugh, things that are awe inspiring, and things that move us emotionally are high on that list.

One of the best non-digital examples of a contagious idea in the book is his story of actress Tippi Hedren and her effort to help Vietnam refugees in the 1970s. While visiting a tent camp in California in her full couture, the women became fascinated by her professionally manicured fingernails. Tippi returned the next day with her manicurist who showed them how a manicure is given. From the initial training of 20 Vietnamese women, the skill was passed along to the influx of Vietnamese “boat people” that followed the fall of Saigon 1975. It’s no mere coincidence that many nail salons to this day across this country are operated by Vietnamese Americans.

This book is an engaging read. The fundamental ideas are applicable to so many efforts where the goal is to spread ideas quickly from one person to another.