(Sept. 5, 2018) Catherine Read sits down with suicide prevention advocate Leilani Tizon to discuss her work surrounding suicide prevention and awareness. Leilani’s brother Christopher committed suicide when she was in the sixth grade, and she has spent much of her young life working to help others who are plagued by this tragedy. September is National Suicide Awareness Month, with World Suicide Prevention Day on September 10th.   During this time, individuals and organizations will be drawing attention to the problem of suicide and advocating for the prevention of this terrible tragedy.

As a freshman at Forest Park High School in Woodbridge, Leilani first noticed that the curriculum surrounding suicide prevention was not very robust. The students were shown a video, and when kids asked follow-up questions the teachers were not trained how to answer those questions or address the concerns. Leilani took it into her own hands to approach those in charge of creating the video, and give some feedback on what it is really like to lose a family member to suicide.

As the school adjusted their programming, Leilani began to speak directly with her peers about the very difficult issue of suicide. Although it was painful and scary for her to discuss the details at first, she found value in sharing her family’s story. Her hope was that she was able to reach kids who needed extra support and be able to help them find the resources they need to get through their crises. 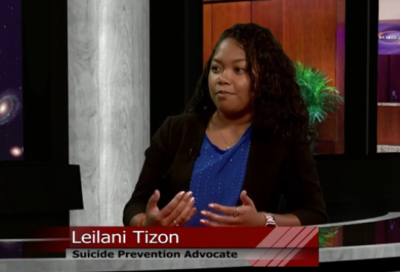 During her junior year, WUSA-9 conducted a live interview with Leilani and hosted a live chat where she was able to answer questions from viewers. She was happy to share her story with a wider audience, and connect with more people who needed help. Unfortunately, other kids in her school were not happy that she was getting so much attention, and she began to be bullied during school. This was a very difficult time for her, which caused her to retreat and step away from the spotlight. When she moved on to college, she decided to elevate her voice again, because she knew that she could really make a difference.

Suicide is quickly becoming a leading cause of death in the America. It is now the second leading cause of death in people aged 10-24 years old. The difficult thing for surviving family members to deal with is that nine out of ten times there are no specific warning signs. Suicide most often occurs when stressors exceed current coping abilities of those suffering from a mental health condition.   Many surviving family and friends look back and say “what if?” when they are attempting to make sense of what happened. Leilani admits that she and her parents went through the same thing after her brother took his own life, but she learned that doing this was not going to bring him back and did not help them cope with their tragedy.

In working with kids who are suffering, Leilani stresses to parents the importance of really listening to their kids. When children reach out and ask for help, it is very important to respect and trust them. Leilani runs into many parents who want to pretend that things are “just fine” and that their kids are just “going through a phase”. She stresses the importance of addressing problems head on and seeking out support and guidance, in order to ensure the health and well being of their children. Ignoring issues of depression will not make them go away.

This month there will be multiple opportunities to show support and solidarity with those who have lost love ones to suicide. There are many community Out of the Darkness walks, where family members and friends can honor their loved ones and walk to raise money and awareness about suicide. Leilani’s family will participate in the walk in Washington, DC this year on October 20th at the Lincoln Memorial. There will also be many community events across the area, including a walk in Fairfax City on September 29th at 11 amth at the amphitheater at City Hall.  You can visit the National Association for Suicide Prevention website to find a walk in your community.