(May 9, 2018) Catherine Read interviews Dr.Klara Bilgin, Dean of the School of Public and International Affairs for Virginia International University, about the outcome of the recent Russian elections. Dr. Bilgin shares her insights as to the what the future holds for Russia, and how she believes Vladamir Putin plans to exercise his influence inside his country and around the world.

The outcome of the March 18th elections came as no surprise, as Vladimir Putin sailed to victory with 77% of the popular vote. Many were disappointed that the opposition candidates put up such small numbers. The candidate to receive the second most amount of votes was a communist party candidate, receiving 12% of the vote, while the ultranationalist candidate received 5.6% of the vote. The one liberal opposition candidate did not get more than 2% of the vote, which was also a disappointment for those who want to see Russia move in a new direction.

Because of his resounding victory, the country did not experience the protests that were thought to materialize after the election. This was a welcomed development by the establishment, as it shored up Putin’s authority. Dr. Bilgin had several insights into this election, as she often sees these international events through a different lens. According to the Russian constitution, this election will be Putin’s last, and his term will last for 6 years. Some may consider him a lame duck president, however, Dr. Bilgin feels otherwise. She sees his role as one of spreading Russian influence throughout the world. 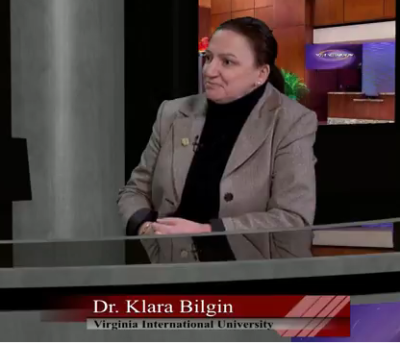 Dr. Bilgin notes that Putin was very affected by the death of Muammar Gaddafi and the regime change that happened in Libya. Putin seeks to get in front of that type of situation happening in his own country by spreading his power and influence throughout his country and the world. Putin has shored up support inside his country by concentrating power domestically and putting oligarchs in charge of many of the central services. Now that he has that under control, he aims to strategically affect outside elections and governments. Starting with those close to home, he has worked at spreading his influence to the former Soviet Republics and Eastern Europe. Next he moved on to influencing elections in Western Europe and the Americas, as witnessed in recent elections in France, Germany and the United States. It has also been shown that Russians, through Cambridge Analytica, attempted to influence the Brexit vote.

Other recent news out of Russia includes information on the case of a double agent (Skripal) and his daughter Yulia who were poisoned in England. These are considered open and brazen assassination attempts by the Russian government, designed to send a message of what will happen if you defy the Russian government. Dr. Bilgin thinks that Putin underestimated the world response. Seventeen countries have condemned these acts, and the world is on alert to Russia’s dirty practices. Dr. Bilgin hopes that Britain will crack down on Russian oligarchs who park dirty money in London banks. She thinks that going after these bad players would send a strong message to Putin and those around him that they need to play by the same rules.

Lastly, Dr. Bilgin discussed a devastating fire that tore through a mall in the small Siberian town of Kemerovo. There were 64 victims, and many who were there claim that there were a variety of things that could have prevented such a devastating loss of life. An improved alarm system could have helped people escape, and if the doors had been unlocked people could have escaped faster. Additionally, they thought that Emergency personnel could have had a quicker response, and if they had then the outcome could have been different. Many citizens on the ground in Siberia demonstrated against the government, and were simply dismissed by the local governor as troublemakers. After such a devastating event, the people did not approve of this response. Putin finally stepped in to address the concerns, but many were not pleased with the overall response.