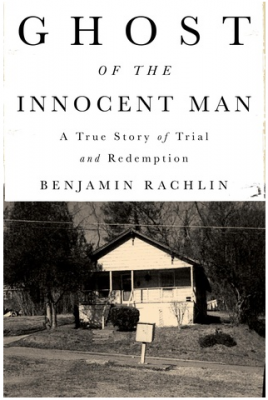 (Sept. 2017) What a remarkable book. The entire gripping story is gleaned from 25 years worth of notes, transcripts, forms, files, interviews and testimony. No one’s name has been changed because it’s all a matter of public record. If transparency is what you want, then this style of non-fiction investigative journalism will deliver that on every page.

The book starts off telling two stories: The conviction of Willie James Grimes in 1989 for a rape in Hickory, NC; and the formation of North Carolina’s Innocence Inquiry Commission (NCIIC) which is the first and ONLY commission of its kind in the entire United States. In ten years, the NCIIC has exonerated 10 wrongly convicted inmates.

The chapters alternate between the two stories, which converge when inmate Willie Grimes eventually connects with Christine Mumma, who was the driving force behind the formation of the NCIIC. As a young lawyer fresh out of law school clerking for the Chief Justice of North Carolina’s Supreme Court, I. Beverly Lake, Christine began flagging cases that looked like wrongful convictions. She was frustrated by the fact that appeals are only matters of procedural considerations and NOT about actual innocence. She convinces this conservative Judge to work with the liberal academics of North Carolina’s Innocence Project to form a working group that eventual swelled to 30 members from DA offices, sheriff’s departments, police departments, defense attorneys and even members of a victims rights group. It was rocky, contentious, messy and hard. That group was the genesis of The North Carolina Center on Actual Innocence, where Mumma remains its Executive Director.

The story of the birth of the NCIIC is every bit as gripping and frustrating as the wrongful conviction of Willie James Grimes. We know from the beginning of the book that he is innocent of this crime of rape which happened in Hickory, NC, in 1988. This was at a time when DNA testing was in its infancy and not used as a primary tool in crime investigations. Willie Grimes is convicted based on the testimony of the 69 year old victim and the testimony of a specialist in hair identification – which would later be totally discredited as a reliable tool for identifying perpetrators.

The author, Benjamin Rachlin, walks us through incompetencies at every level – in excruciating detail – from the initial investigation of the crime, to Willie’s many moves among multiple prisons for no apparent reason, to psychiatric reports that are breathtaking in their presumptions, misinformation and misdiagnosis.

The inhumanity of the criminal justice system screams from every page. And the author is simply relaying the information contained in volumes of reports about every tiny aspect of Willie’s life inside the North Carolina prison system. It’s also a walk through 25 years of pharmacology in the U.S. This man entered prison taking no medications whatsoever, and the list of prescription medications and the amounts he was given in the almost 25 years he was a prison is mind boggling. The fact that he had advanced prostate cancer that was overlooked despite constant medical supervision is just one of a long list of incompetencies that plagued this man’s life.

This book is simultaneously infuriating and frustrating and also incredibly inspiring. What happened to Willie Grimes is not some rare case. Far from it. As of March 2017, there have been over 2,000 exonerations in the U.S. – at least one in every state. And that is the tip of the iceberg. Keep in mind that the North Carolina Innocence Inquiry Commission has no counterpart in any other state. There are Innocence Projects scattered across the country doing what work they can, and there are some Conviction Integrity Offices working under District Attorneys in various cities and counties. But the North Carolina Legislature formed this commission and FUNDED this commission and gave them legal authority to decide if a convicted defendant is actually innocent.

The protagonists in this book are Willie J. Grimes and Christine Mumma. Where their stories converge is the heart of this book. The NCIIC decided to investigate his case – a fascinating look at how they conducted that investigation – and then made their case to the 8 member commission which voted unanimously to send it to a 3 judge panel. After living every minute with Willie in prison, and watching the machinations of Christine to invent something that had never been done before, I think I held my breath through the last chapters of the book.

This book is so real. The writing is excellent. Benjamin Rachlin masterfully weaves all this “information” into a compelling story. And he’s not in it. That is the other remarkable aspect of this book – the absence of the writer’s presence. That is a talent not to be overlooked. I’m not sure a lesser writer could have turned 24 years of prison reports into a page turner of a book. This author did that.

I love this book. It makes me crazy to think that we have allowed this to go on. It makes me crazy to think that after a decade of showing the effectiveness of this kind of commission that NO OTHER STATE has followed North Carolina. Why? Do we really not care enough about the integrity of our system of justice to warrant replicating a proven model that has saved the wrongly convicted from death row and life sentences? WTF?

Read this book and then get really really mad. Get up on your high horse and take a wild ride to your state capitol and advocate for your legislature to DO THIS THING!